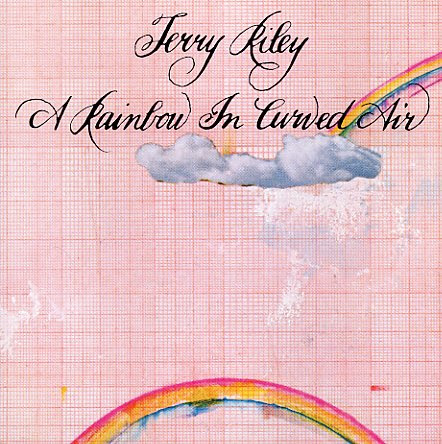 In terms of electronic music, A Rainbow In Curved Air is part of the basic elemental code. In terms of classical music, it's a touchstone of the minimalist movement that Steve Reich and Philip Glass would devote their careers to. In terms of psychedelic music, this is a damn fine album to trance out to.

The two sides of this album will lull your brain into a perfect trance. This is music where stopping it before it reaches its completion will make you flinch a little bit - like you suddenly ran out of air. In fact, these repetitive, shifting parts truly are a sort of musical air. It will create a temporary and colorful headspace for the attentive listener.

Each album side consists of a single piece, and the construction of them is similar, with a few simple musical phrases repeating, interacting in different ways, and creating an awesome sonic tapestry. The first side, which gives the LP its title, uses several organs, tape loops, and clicking percussive sounds from early synths to produce a lulling tone. This is one of the first albums to create a serious sonic vocabulary that the electronic music genre would later adopt, in terms of both the krautrock pioneers of the 70's and the more modern dance floor tech heads. It's arguably the first serious electronic album and in stark contrast to the easy listening-infected novelty albums that appeared around this time.

The second side, titled "Poppy Nogood And The Phantom Band,' retains the organ as a backdrop, but adds horns to dance on top of that framework. Although similar in construction, it has a little more of a classically-based sound as opposed to the electronic pulse of side one.

If you've got the attention span for this sort of thing, you'll find this to be an album that is both highly influential and extremely listenable. This is pure trance music.

Yes, yes, YES! But can you get his original version of "In C"? I have it only on vinyl. I found the Bang The Can version online, but it's much busier, and not as trancey. I'd love "In C" in unbroken digital form!

I can't find anything but the Bang On A Can version myself. If there's interest, I could get to some Descending Moonshine Dervishes.

Yeah, that's good too (found it trawling the same place you did, presumably), but I'd LOVE a rip of the original In C! The CD was only briefly available, for some reason.

THIS MUSIC IS GOOD FOR YOU!!!


(Other suggestions for early electronic: Milton Subotnick's Silver Apples, and Stockhausen's Hymnen, the Fourth Region of which is THE most mindblowing music I ever heard ...)

I have a ton of Subotnick. I'll get him on the short list.

I've just finished an exhautive and fruitless search for Hymnen on the net. It's only available as part of a cripplingly expensive box set. I have it on vinyl, but nothing to play it on. Julian Cope has a lot of good things to say about it. If you really want to drive yourself nuts, try to hear it. The Fourth Region was also on a bizarre Polygram double album "Stockhausen Greatest Hits" (!) which is another temporarily unplayable treasue of mine. Sorry if this ramble isn't relevant - feel free to delete it once read! (And thanks for the blog, which I read more than download from).

Nah, I only erase obnoxious and or spam posts (which I luckly haven't gotten much of here). I want to drive myself nuts, so please drop a line if you find those albums. I'm sure I'd be happy to give them a home here.

I ripped my vinyl of "In C" to share, but then I found that the cd is available along with lots of other Terry Riley at Amazon.com. You might give it a look.

There's a loooong version of In C here:

- but I can't find recording details on the website (where there's a load of Riley music downloadable, all apparently legit).

Eddie - it's good to know In C is again available, but I'm past the point where I can continue to buy CD versions of vinyl I already bought. And as, at the moment, my vinyl is half way round the world, I'd like an mp3 of In C to play on my iMac!

Thanks a lot Dr. Schluss ! I searched this album for more than 30 years !!! I just recorded it from tape to tape at that time and hadn't neither artist's name nor album's title !

Your blog is fantastic and I discovered a lot of gems here!

Again thanks a lot from France

Hi, I found this post while looking for Hymnen by Stockhausen. I actually have found a live set of links for that album if you or "Pants Elk" are still interested.

These are courtesy of http://projectaisle.blogspot.com

And thanks for the interesting blog. This is my first time here so I still need to look around but it looks very interesting.

Welcome to the blog and thanks for the link, Hrothgar (or Andy I suppose)! Beyond name recognition, I have to admit I'm pretty ignorant about Stockhausen. But if I dig Riley, Reich, and Glass, I imagine it probably makes sense to give a listen.

A brutal masterpiece indeed...
to the hall of fame for shure!

New link can be found at a text file at
http://deerfile.com/5hsbyzh97he5