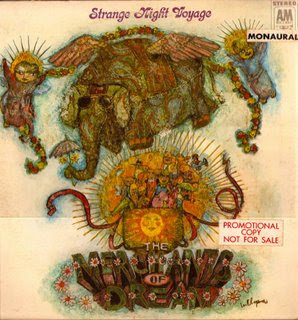 I've got to admit that I rarely mentally apply myself to album concepts, and for better or for worse Strange Night Voyage is no exception. Fortunately, we get enough little nuggets of great psychedelic pop that the story doesn't really matter a whole lot. I don't know, show me the Broadway revival of this and maybe I'll get that aspect more; except that I'm not really a Broadway fan in the first place.
Posted by Dr. Schluss at 8:23 AM 13 comments: 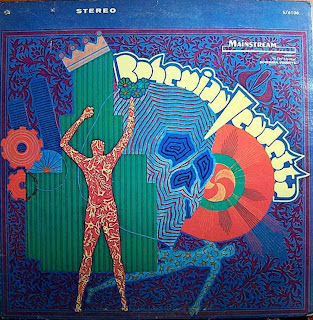 While not the grooviest band on the block, Bohemian Vendetta manages to rip out some nice face melting sounds on their sole LP. I would rate this quite on the level of the Electric Prunes at their best, and especially not the Chocolate Watchband, but I'd imagine that these guys could give the Strawberry Alarm Clock some competition at the local civic center's battle of the bands.

The good news here is that the first track, "Riddles and Fairytales is what we might call the 'shiztatch' here in the ATL. It's a prime garage rocker and deserves a prime spot on your next tape mix (although I guess we'll substitute the mp3 mix in this modern world). Elsewhere, we find a few questionable covers. Their cover of "(I Can't Get No) Satisfaction" gets five points for some great acid guitar leads, but then loses 76 by being painfully slow and having screechy vocals. They also tackle "House of the Rising Sun," and it's much better, but as you may figure it doesn't lick the poopie toilet paper of the Animals' rendition.

The other originals are no great shakes, but they do seem to get better as the album progresses (nevermind the phenomenal opening track). "Paradox City," "Images," and "Deaf, Dumb, and Blind" all nicely meld some searing acid rock guitar to some mind-bending structures. Things are spotty on this album, but the high points are more than worth your attention.


Bohemian Vendetta probably is a good candidate for the quintessential acid garage band. That is to say they don't take home the first prize unopposed, but they do manage to stumble onto some inspired sounds from time to time. I'm sure your friends will give you cool points for pulling this one out on vinyl (and there is a 180-gram reissue somewhere out there).
Posted by Dr. Schluss at 7:54 AM 7 comments: 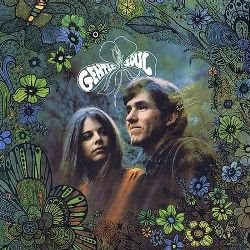 Yeah, Gentle Soul. I guess that's a nice, peaceful nomenclature for the late 60's, but matched with this music, I can't help but imagining these folks getting a beat down in the back alley. Visions of blood and bruises aside, this is a very adept mix of whitewashed folk/pop and some production trappings from sunshine pop. If you're hip to harpsichords, you'll find plenty to dig here. The vocal harmonies are supremely sweet and dead on, but I do feel an occasional need to strike the cheese alarm. For the collectors out there, there are some big names affiliated with this album. 60's producing legend Terry Melcher is behind the boards while Ry Cooder and Van Dyke Parks make some instrumental appearences (never mind any puns; take the sentence at face value).

There is not a ton of stylistic variations here. Pretty much everything is centered around happily strummed acoustic guitars, with sugary-sweet boy/girl harmonies on top and very light chamber orchestration ornamenting the music. With the opening "Overture," we hear a little more complexity since there are no vocals, and in many ways it's my favorite track here. The rest of the album is like eating white bread for lunch, although if pressed to pick favorites I'd tell you to skip forward to "Marcus," "Through A Dream," and "Renaissance." The happy folk of Gentle Soul come across as a little plain, but there are no major missteps here, and many acts of this sort tend to drift out into the overly syrupy.

This is some very adept soft folk pop, and if that's your bag then you need to hear this. For the rest of us the clean production and assured performances should hold your attention at least for a couple of spins. 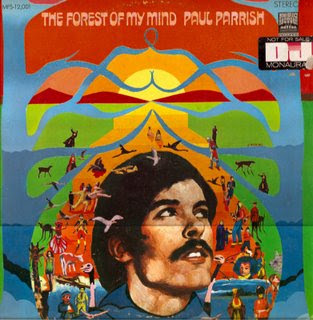 Although coming directly from the deepest fog of obscurity, The Forest Of My Mind rates as a totally first rate album. It's pristine psychedelic folk pop that deserves some latter-day notoriety.
Posted by Dr. Schluss at 10:04 AM 24 comments:

Although Cottonwoodhill seems to get all the freakish glory in the universe of Brainticket, for my money this is the better album. Although I suppose it's lacking a bit in the full on, balls-to-the-wall freakiness of that earlier album, Celestial Ocean is a more assured and graceful psychedelic voyage through parts unknown.

One big plus here is the much more varied sound present here. Instead of spending half the album on a bubbling groove, the band explores a much wider series of sonic vistas. There's a mystical vibe here that manages to evoke Egyptian pyramids, Mayan temples, and Indian countrysides.

The album functions on sort of a bell curve of energy. The tracks, while very different, form sort of a suite. The first three tracks, "Egyptian Kings," "Jardins," and "Rainbow" start things off on a lilting note. Joel Vandroogenbroeck and Dawn Muir share a strange, half spoken duet on "Egyptian Kings" while "rainbow" definitely brings up the images of that aforementioned Indian countryside. Then the gears kick up a notch on the next three percussive tracks that throw in some awesome modular synth squeals. It's almost as wild as the first album, but it's much tighter and has more of a sense of traveling somewhere. There are also plenty of shades of early Popol Vuh and Tangerine Dream added in for fun. "Cosmic Wind" and "Visions" give us a beautiful coda, focusing more on acoustic sounds.

This is a more relaxed album than Brainticket is generally known for. I think that it's the sound of a band very much in a prime groove and is a must hear. 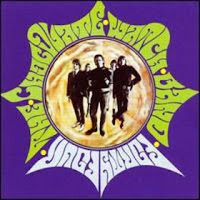 The group's producers had other ideas, however, releasing two more albums (The Inner Mystique, One Step Beyond) in 1968 and 1969 , sporting the band's name but not too much else associated with the group. That would probably have been the end of the group's story, but in the early '80s, record buyers and, more particularly, young musicians discovered the Watchband. A set of Australian reissues of the group's albums quickly found a market in America and Europe. Thus, it was no surprise when, in 1994, Sundazed Records reissued the complete Watchband catalog on compact disc. (Am)