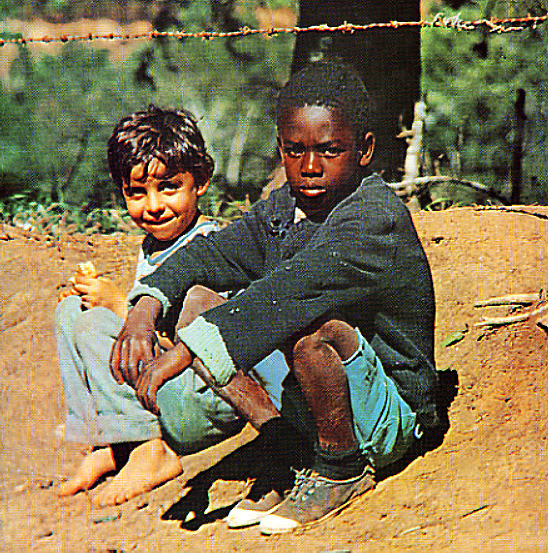 One part of the world that has never had trouble forging its own identity in the wily world of popular music is Brazil. The tropicalia movement of the late 60's was pretty small, but highly influential. A few daring individuals threw together a melting pot of pretty much anything they wanted and the reverberations still continue today. Seriously, if you haven't heard it, this stuff often equals the A-list artists of the United States and Great Britain. The Brazilian musicians even get some extra counterculture points as they worked under the threat of possible execution from the military dictatorship in power at the time. Leading lights Caetano Veloso and Gilberto Gil found themselves in prison and then exile due to their music.

The album we're looking at here isn't exactly part of the proper tropicalia movement, but is some glorious fallout from a few years later. The musicians making up the Clube Da Esquina worked in a slightly more chilled out mood, meeting every week or so, drinking beer, talking about the Beatles, and getting a few jams in. This disc documents the wonderful music they ended up with. Mr. Nascimento is the deserving headliner here, contributing plenty of songwriting and the bulk of the vocals. A few years later his start would rise considerably as a proper solo artist, but I'd be willing to say that his best work of a fine career is present here.

As a sprawling double album, I guess that this is the Brazilian equivalent of a White Album. While Clube Da Esquina does go on a bit longer than may be optimal, I'd be hesitant to choose anything to erase from here. Even scraps like "Saidas E Bandeiras" are relatively well thought out and earn a place here.

Of course, the choice tracks are among the best music that I've heard period. "Tudo Que Voce Podia Ser" is an awesome opener with nice building percussion. We'll also fine some immaculate Brazilian percussion on "Cravo E Canela." Some other highlights include "O Trem Azul," which is a paramount example of a drifting cloud of stoned psychedelia. "San Vicente" sounds like "Go Only Knows" for a Brazilian Pet Sounds. I mean this as a high complement.

Making it past the hour mark, it's sometimes a little difficult to take this all in at once. Still, the pacing is pretty even, with the slightly more uptempo "Trem De Doido" and "Nada Sera Como Antes" appearing near the end of the album.

All the lyrics here are in Portuguese. The word on the street is that the lyrics here succeed in reaching some nice poetic highs and are worthwhile if you can make it out. I don't know a word of the language prsonally, but it sounds damn fine being sung here.

Never breaking past the language barrier to popular acclaim abroad, Clube Da Esquina is one of the better albums of the early 70's. Expand your culture and sonic mind with these recordings.

Congratulations for the post. I am from Brazil and I love all the psychdelic sounds you put on your blogspot. I also have to say that your words about the record are very acurate.
Thank you

This is a really enjoyable listen. Thanks for posting!

absolutely agreed, this is some of my favorite music anywhere.

Thanks...a surprising find. You continue to impress me with your offerings.

You have a great blog here, I'd like to thank you for the excellent selections. Also, it's nice to read well thought out texts for the albums you post. Such is the case of this one, that is very foreign to most Americans and that you pretty much nailed it.

By the way, I highly recommend Clube da Esquina 2, if you can find it. Who says that lightning doesn't strike twice?