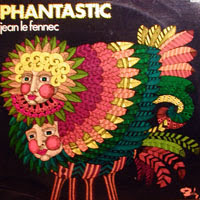 To expand your cultural horizons a little bit, we'll look at a French language LP hailing from the prime of psychedelic pop. Jean Le Fennec's Phantastic has the virtue of sounding distinctive among the tidal wave of obscure late 60's albums. Here, we get a sound that is certainly accepting the sunnier side of psychedelic pop, and melding it with the vermouth swirling sounds of French pop. Think of Serge Gainsbourg with a nice tall bottle of absinthe.

The first three songs here really do give a nice 50/50 combination of these styles and make for a strong opening run. "L'Abandon" really does deserve a prime spot on the more jet-setting editions of Nuggets with it's endlessly echoed vocals and first rate garage fuzz guitar. Firmly staking out his sonic ground on these tracks, Mr. Fennec proceeds to experiment a little more. "Marie Cecile" is our nine minute epic which reaches a little towards the San Francisco sound. It's like Dino Valente's extended acoustic shambles with a few full band interruptions. And like Valente, I'm still on the fence as to whether I like Fennec's voice or not. I guess he does well with the sleazy baritone, but doesn't work so well ouside of that comfort zone.

There are some truly strange arrangements here, as "Mes Enfants D'Autre Part" and "Le Chat Et Le Souris" sport some strangely place screeching horns and string respectively. "La Boule Et Le Verre" give us another prime dose of distinctively French psych pop. Make sure to reach the end of the album as "Le Disloque" is another major highlight. It's like swinging out in a totally trash Vegas go-go dancing bar, with French vocals of course.

Phantastic may not quite live up to it's name, but it still is a damn fine blast of French-styled psych. Still, you'll find at least two or three phenomenal tracks on this LP (the first one and the last one for me), and that's more than you can say for a lot of freakish 60's albums rearing their head in the present.
Posted by Dr. Schluss at 12:08 PM

Very excited to hear this. Your descriptions always perfectly prepare me. Thanks.

Absolutely FANTASTIC!!!! ..or should I say PHANtastic? Wowwww.. amazing tracks... anyone know if this guy is around ??