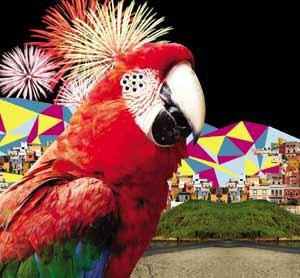 This is damn good stuff. Although El Guincho is a psychedelic obscurity in the here and now, he may very well not be by the end of this year. The sound of this album is very much analogous to Animal Collective, and specifically Panda Bear's Person Pitch, but there's a great tropical percussiveness that brings something new to the table. While I'm reluctant to say this is as good as the already classic Person Pitch, it definitely comes within spitting distance, and that's an enviable accomplishment. At least I liked it enough to pre-order a copy for my dad.

El Guincho tends to build his tracks off of a rhythmic base, and builds on top of that with a few samples and repetitive in a trance-like way vocals. I believe the man is from the Canary Islands, but I feel like I'm attending a psychedelic carnivale when listening to this one.

Some of my favorite tracks here include "Antillas," which features guitars that seem to cross reference some of the guitar sound of African pop (especially the stuff I've heard from Mali). "Kalise" is a energetic conga line taking place after a few too many tequila sunrises that may have been spiked with ayahuasca. "Buenos Matrimonios Ahi A Fuera" has chanting vocals thrust through a prism of electronically dismantled organic percussion, while "Polca Mazurca" is a nice closer that sounds like the island bar closing at, oh, 11am.

I found this at the wonderful blog "My Inland Empire" where they stated that listening to this now could very well get you an early seat on the 'cool kids' bandwagon. Even if this one never catches the ears of the indie kids, you need it to catch yours.

El Guincho graciously gave me permission to post the whole album, but understandably was a little worried that his label might not dig that. In keeping with the idea that music of this quality deserves a little income, I'm posting two songs here. I promise you that if you like them then you'll enjoy the whole album. Give the fellow a visit at his myspace page too: http://profile.myspace.com/index.cfm?fuseaction=user.viewprofile&friendID=115889409