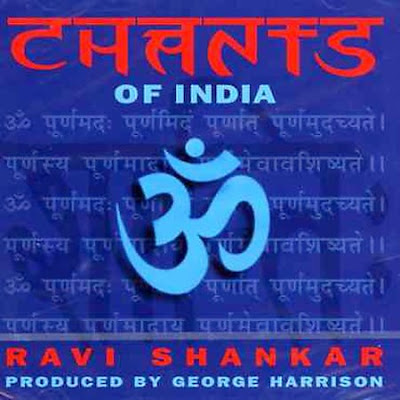 I'm still having some problems with my internet connection, but I went out of my way to share this one with you as I've been listening to it regularly for the past five years (and almost daily for the past month or two). Ravi Shankar and George Harrison are certainly not obscure fellows, but this is apparently out of print, so here we are. Despite the marquee names, you won't hear Ravi Shankar's sitar or George Harrison's voice or lead guitar. Still, this is one of the best things that either recorded in their careers. Shankar took it upon himself to arrange a number of ancient Indian chants, while Harrison took on the role of producer and contributes some acoustic guitar parts as well as some instrumental textures such as the vibraphone. This is truly transcendent music - much of the music on this blog may take on additional layers after ingesting a few psychedelic substances, but all this album needs to take you on a trip is a ray of sunlight piercing through your window.

A track-by-track review doesn't really seem appropriate when dealing with deeply religious music, so I won't bother. I will say that the chanting is top notch to my ear, while Harrison's instrumental contributions adds a little incentive for the modern rockers among us. Shankar's arrangements do include much of the East with the chanting and drones, but a fair amount of western sounds show up as well with acoustic guitars and some string embellishments wafting over the music. One session of this was recorded in London, while the other two took place in Mumbai. As such, it's not an entirely authentic Indian experience, but it is as near a perfect musical and spiritual experience as you're likely to find on a physical slab of media.

This would easily make my list of ten 'Desert Island Discs' for those of you that used to peruse the pages of Tower Records' "Pulse" magazine. I've been playing this a lot around my one-year-old daughter as what I hope is mind expanding children's music. This album is truly a part of my life and a very welcome gift from Shankar and the departed Harrison. I hope you will dig it as well.
Posted by Dr. Schluss at 12:49 AM 10 comments: