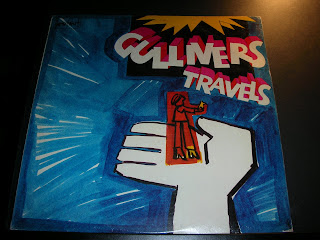 Now this one is a strange artifact. With the Rolling Stones' producer Andrew Loog Oldham at the helm, this is theoretically a concept piece of the titular Gulliver. In practice, this doesn't really come out at all. What we have instead is a very early example of what might now be considered sampling or a mash-up.

The results are always interesting, if not always impressive. This LP includes lots of unlicenced harvesting from plenty of period records, including the Small Faces, the Lovin' Spoonful, the 20th Century Fox fanfare, tons of catalog easy listening, and a bit of the Zodiac. It's hard for me to even figure out what was was created for the album and what was brought in from elsewhere as I haven't heard every freaked out album from 1967-1968.

What we're left with then is the sonic journey itself, and it's pretty enjoyable. We'll throw musicianship out the window and focus on aspects more that we'd look at with modern electronic DJs. The album tracks are impossible to work out, with only the album sides marking a break in the music, as modern mix albums are limited by CD length. It's kind of fun to listen to just to work out what you can recognize and what you can't. The album is like a highly lysergic K-Tel mix of oddities.

Even among the rampant experimentation of the 60's, Gulliver's Travels is something else indeed. Giving this a listen is sort of like presenting yourself with a sonic quiz. Let's see how you do.
Posted by Dr. Schluss at 12:10 AM

Thanks for all your work. I appreciate it.

This one intrigues me! Thanks, never heard of it before. THANKS!

It seems apparently that Gulliver's Travels was produced as a show featuring Michael D'Abo. Immediate released a 45 for it.

Yes, there was 1 night show at the Merlin Theatre in Weston Super Mare, for which I've got a signed programme... would love to know if this worth anything!

i wasn't aware of this prior to your share. having downloaded it a while back, i only just now listened to it. and interesting artifact. thanks for bringing it to my attention.