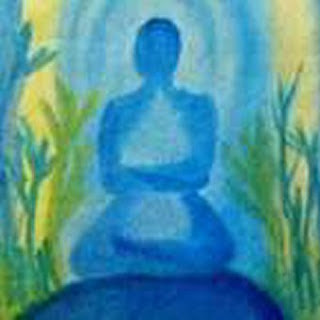 One thing we'll say for Joel V is that the man is pretty diverse. Without having any hard info to base this on, I imagine that after a few years swirling around in the psychedelic vortex documented on Brainticket's Cottonwoodhill, the man did what any hippy worth his salt would do and spent a few years trying to achieve altered states of mind through meditation as opposed to psychedelic drugs. I'll use the title of this album as exhibit A; plus after googling his name I think there were a few new age seminars that the man was speaking at.

Anyhow, this general frame of mind seems to fit Joel V better than the acid lunatic role did, at least on this album. This sound nothing like Brainticket, focusing instead on ambient electronics, sparce but etheral vocal, and a few organic instruments accenting the sound nicely. Not having tried any serious meditation myself, this seems to indeed be a fine album to meditate to.

The epic tracks bookend this album. The 14 minute "Group Meditation" is a very foggy drone track, although it is a very happy drone for the most part. There are some occasional Music For Airport style piano plunks that sometimes break things up a bit along with nice overtones from God knows what. Sometimes it's difficult to see through the haze. There's also a synth flute hovering somewhere low in the mix. For a few seconds here and there, it was a little cheezy.

On the other end of the album we find "Beyond Tampura" clocking in at an intimidating 24 minutes. It struck me as sounding similar to something we might find on Klaus Schultz's Mirage. Joel V adds a little more life by throwing on some nice melodic electric piano parts.

Fortunately, the shorter pieces sandwiched in between are pretty good too; focusing a little more on melody for the most part, while not disrupting the meditative vibe of the album. "Summer Clouds" sounds like something that would work well for the planet soundtrack on Star Trek (for you trekkies out there, it specifically reminds me of the Genesis music from Star Trek III). "Mantra" comes across like Radiohead's "Treefingers" 20 years early while "Sand 'n' Wind" does a nice job of referencing the Berlin school electronics.

There is no false advertising here. If you want music that fits the title and want to look like the fellow on the cover through your third eye, then this disc is exactly what you're looking for. This is one of my most listened to albums as it does do a phenomenal job of creating a nice, gauzy temporary headspace. Just don't listen to this expecting a follow-up to Brainticket; this isn't even in the same genre (except for I guess the sort of umbrella obscure psychedelia one).
Posted by Dr. Schluss at 7:15 PM

Thank you for this and many other wonderful and rare music.
I wonder if you have or can obtain and then publish here, an album I used to own in the late 60s/early 70s. It is called "OM" and is by Cecil McCartney. I have tried for 30 years to obtain this album, preferably on CD or high quality mp3s. I know that it has not been made available commercially on CD but someone may have ripped it and converted it [I hope!].
I know that Cecil McCartney is still around and I believe he is living in Ireland as a painter where he was a friend of Van Morrison until their falling out.
Icewarrior

Hi Joseph - I know Cecil and see him once a week or so. He doesn't have an email but if you want to email me your number i'll pass it on. He was both vinyl and CD's copies of OM still lying about. nartysham@gmail.com

This is nice, and on certain days, just what I'll need.

I'm not sure he's Swiss, I mean with a name like van Droogenbroeck. I'll bet he's really from Brabant,in Belgium, a bit down river from the Swiss.
(Right, doesn't matter.)

cheers
&
Thanks for the music.

Hi,
one year on and I have, through the help of nartysham been in contact with Cecil McCartney, who has graciously sent me a copy of his album "OM" ripped to CD from vinyl. I have removed all of the wear sounds [hiss, pops and crackle] and attempted a re-master of sorts using Audition 2.
I have sent a re-mastered and re-recorded copy back to Cecil and he is happy that this should be made freely available and free to anyone who would like it.
Unforunately I am not able to host this album because I do not have a blog site, nor indeed any web site but I should like to offer this for free download if someone who has a music blog site will host it.
Icewarrior

Please, can anybody upload the Cecil Mccartney Record? Is it possible? it would be wonderful!Pleaseee

Hi,
This is Om,rumours of my death are wildly exaggerated: I'm still living in Bangor, painting (check out the Kenny Gallery).

Thanks for the interest.
By the way Icewarrior thanks for the promotion but do not distribute this album freely as there are publishing and copyright restrictions.

If anyone wants a copy of OM I'm in the process of putting up a web site where the album will be legally available.

Thanks again for the interest.

You can re up?

hey - i know a blog as big as this is getting slammed with reups all over the place and you've probably fed up with it but i've combed every nook and cranny seen and invisible and i haven't been able to find either this or vol2 out there. a reup would be a public service for sure.