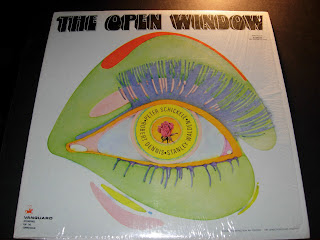 I'm not going to pretend that I know anything about this band other than what I can glean from the album cover. This three person group seems to be working on the socialist model as all three members provide songwriting, keyboards, percussion, vocals, and recorders. They claim that their M.O. is as a chamber-jazz group, which make a certain amount of sense. With retrospect in hand though, that's not quite what I hear.

This strange album to me is the sound of Smile-era Brian Wilson and Van Dyke Parks drifting away into the lysergic ether (that is to say a slightly more produced Smiley Smile, I suppose). In the wall of keyboards are some serious choir-boy vocalizing and the arrangements are like the various sections of a Wilson production disintegrating, creating but an impressionist blur. While this is a very enjoyable album, it's often difficult to focus in on the heavily echoed vocals, pianos, and organs.

The album starts off at its most accessible with "Wild Bill Hickock Rides Again," which could pass off for a Smiley Smile outtake by the Beach Boys, but for the vocals which hit a much more nasal, cutting tone than the Wilson brothers do. It's a pretty cool piece, evoking the wild west both with it's subject matter and piano rolls, while psychedelicizing the sound with echo and droning organs.

The album then pleasantly clouds up with the sound of multiple electric pianos and choral vocals before reconstituting for the jokey "The Girl From Tarentum." I'm sure the band was going for jazzy, but there must have been too many strange substances hanging aroung the studio.

Side two is mostly instrumental, walking a strange line between jazz and classical. This is the Open Window getting a little more pretentious on us. "Italian Symphony" comes across as a more analog, organic version of some of Frank Zappa's early 80's synclavier experiments , while "Piano Concerto No. 1 In G Minor" is basically some disciplined boogie woogie piano with an organ line working its way through the barrage of notes. "The Priest Of The Raven Of Dawn Curtain Call" is a nine minute suite that is completely strange and tripped out. It could cause you to fear for your sanity if you're into that sort of thing.

The Open Window is not quite an A-list lost album. It does manage to create a very unique sound though (although Brian Wilson is the best reference point), and is certainly worth your while for that. It's pretty extreme for a group that seems to see themselves as a sunny jazz pop combo.
Posted by Dr. Schluss at 11:16 AM

Hey Doc, I found your blog through Lost in Tyme. The way you describe the music is spot on & I appreciate the fact that you take the time to write your own album synopses.
This album is very interesting: I like the instrumentals, particularly the piano. It's not A-list, as you say, but enjoyable enough to avoid the recycle bin. Thank you for sharing!

Thanks Mia. Glad you dug the Open Window. My main purpose here is to write reviews for some music far away from the mainstream, but I'm happy that you can get hold of it too. Stuff like this deserves a proper reissue.

liking much, standards high
quirky but solidly so, rich...

Is there a track #3, or have they been misnumbered? There are eight MP3s in the folder, numbered 1, 2, then 4 through 9.

I can't find a full tracklist online, but apparently the album was released in 1969.

Yes, #3 is really missing - but man, this is really one of the few forgotten masterpieces.

I wish the band did dozens of albums!

hello the ! there is a musical,OH, CACUTTA from 1969 !!the group featured on the lp, AID ART label. the tracks of the musical actors are awful, the recordings(6)of OPEN WINDOW are very fine psychedelia.tracks like MUCH TOO SOON, JACK AND JILL, SINCERE REPLAYS will blow your mind away.the is also a coverversion of SINCERE REPLAYS by a german group called BRAVE NEW WORLD, wich is very recommendend. greets

Thanks for the great post, it's strange and wonderful.

Peter Shickele was in Open Window and had already started his PDQ Bach stuff.

Any chance of re loading this? i have the vinyl somewhere in storage.
Many Thanks.
Great Blog.
AJ