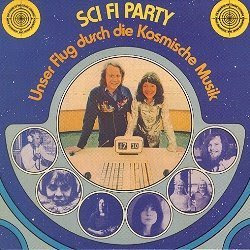 This was pretty much of a barrel-scraping release for the Cosmic Jokers, which is somewhat understandable when you factor in that the band was pissed off at the fellow releasing these slabs of vinyl. Sci-Fi Party is really in some strange netherworld between a label compilation and what we would now refer to as a remix album. There are bit off cutting room floor sounds spliced in, and bits and pieces of previous Cosmic Joker albums, Ash Ra Tempel albums, Wallenstein albums, and even the Cosmic Joker adorned Walter Wegmuller album (that you will see here at the garage shortly), all resequenced. That pretty much means that there is not much to review here as I've probably done it elsewhere already. I will say that I really dig it and tend to put this on about as much as the 'proper' albums (I guess they remain ethically improper). I really, really like the cover art as well. It makes me think of something someone would have in hand in the City of the Domes from Logan's Run. In fact, this album would probably play well in the sex party room from that film (but not the sex party room from the recently-released Caprica).
Posted by Dr. Schluss at 7:14 AM 2 comments: 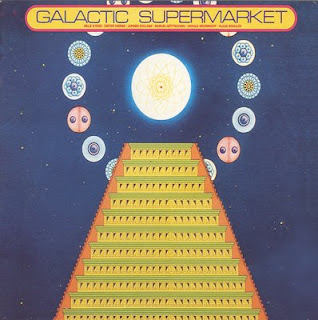 Although far from a copy of the first album, Galactic Supermarket also deserves a place in the pantheon of krautrock. This is a much more rocking affair, and I'd say that especially on this one the 'supergroup' aspect coalesces more or less completely. In fact, I can't think of any other 'supergroups' that I prefer than the Cosmic Jokers. Too bad that the joke turned out to be played on the band itself.
Posted by Dr. Schluss at 6:58 AM 5 comments: 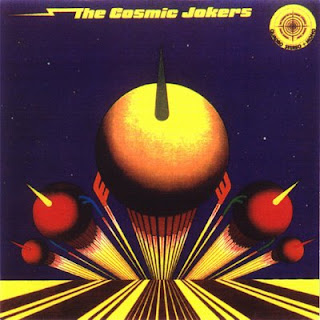 The Cosmic Jokers are a sham, like Milli Vanilli. Kosmiche records guru, Rolf-Ulrich Kaiser, devised a fiendish plan to get in some krautrock superstars from Ash Ra Tempel and Wallenstein into a studio stocked with hallucinogens and a tape recorder for a nominal fee. Several months later the recordings started appearing on record shelves under the monkier "The Cosmic Jokers" without the musicians' knowledge. Apparently Klaus Schultze (synthesizing here) still holds a grudge about it. So, morally this band is the butt of an unfortunate scam. For better or for worse, this is also one of my favorite krautrock bands.

I have to admit that I'm not particularly familiar with Wallenstein, but the early Ash Ra Tempel fingerprints are all over this recording. I dig it more than Schwingungen, and it's certainly within spitting distance of Ash Ra's eponymous debut and Seven Up. Like those recordings, The album is basically divided into two side-long jams, here titled "Galactic Joke" and "Cosmic Joy."
This is the deep-space jamming side of krautrock, with guitarist Manuel Gottsching in particular turning in some of his best work. "Galactic Joke" works up a nice head of steam as Wallenstein's rhythm section works into some serious groove as Schultze and Gottsching plow into phased-out weirdness. "Cosmic Joy" is a little more chilled out, featuring far less percussion, but its cavernous plumes of sound may guide you through a few moments of zen.

One thing that the Cosmic Jokers has over all other krautrock is their complete lack of pretentiousness. In fact, that is very, very rare for any psychedelic jam. These are just a few wasted guys getting used in a studio. Their collective chops, however, are top flight and they manage to create some great music. In fact, for those of you unfamiliar with the strange side of krautrock, this is probably as good a boarding point as you'll find. Those of you already in the 'circle of trust' must hear this.
Posted by Dr. Schluss at 6:39 AM 4 comments: 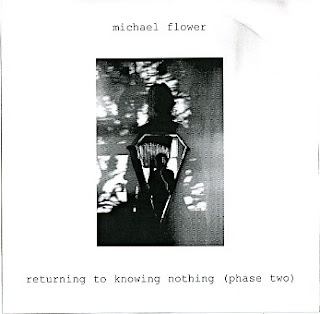 This is a fun take on minimalism with a strong, grungy, urban twist. My father and I went to see the Japanese avant-metal band Boris a few months ago, after which he suggested that the band's height of guitar noise was like the sonic equivalent of blue smoke. I'm willing to attach a similar signifier to this album.
Posted by Dr. Schluss at 6:12 AM 5 comments:

Sitaar Tah! is a Japanese ensemble of about 30 people focusing primarily on the, uh, sitar. The music itself is very cool with layers of sitars floating on top of electronics, organ, and I think some acoustic percussion. Obviously, the music owes quite a bit to Indian music, but there are plenty of modern sensibilities at work and the occasional strain of Japanese folk sounds (sitars and kotos are not that far off from each other). If you haven't caught on yet, I have a soft spot for sitar sounds, so this album got one foot in the door without even trying. It does live up to its promise in great part, but I do have one bone to pick concerning the production. My philosophy is that trance-inducing music works best with the ambiance of a secluded, ancient mountain temple, incense wafting through the air. Tah!!!, however, too often has more of a sterile studio sound. It makes me think of some of Bela Fleck's recordings production-wise, with all the instruments clearly separated and clearly defined. I suppose it works fine for Fleck's jazzy banjo aesthetic, but I do wish this album produced a touch more haze.

The record divides up pretty well into two camps - the first five tracks and the last one. That last one, entitled "Solo," is my favorite. It scraps percussion and actually produces some of the drifting production sounds that I enjoy. While there is a pad of sitar billowing out into the cosmos, I believe that some of the actual solo is performed on the koto. Maybe. The first five tracks are more of an electronic amalgam that hits and misses in about equal qualities. "In Sight" is a fine lead off track to acclimatize the listener to the ensemble's M.O. I also dig "Foyer" quite well; especially when freaky Terry Riley-esque sequenced organ tones begin invading the track in its second half. The three tracks in the middle are far from bad, but they do skirt close to the lamer side of electronica (like the drums in "Peering Into MNDR") and/or new age (like "Into Yaman Coir") a little more often than I'd like. Usually a crazed tabla appears just in time to course correct the music.

There is quite a lot going for the sounds of Sitaar Tah!(.) It's pretty hard to go wrong with a wall of sitars in my book, although there are a few annoying characteristics that I hope the group hashes out on other recordings. This is a wonderful album to provide droning weirdness to your day.

The Best Band Ever?