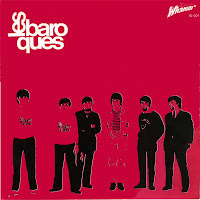 The band was in the same ligue that Q-65, The Motions, The Outsiders and the Golden Earrings, so one of the wildest albums ever made in Holland (along with these bands). The band was always under the influence of O`Shannon mood, he always tried to squeeze the bluesy feelings and the personal emotion of the other members of the band.

Their style can be defined as a mix of r&b, poppy things and a small combination of classic rock with raw blues. Something that is also very particular in this case, is that the band never released their singles in future compilations. You may find the complete recordings in a great double compilation, that contains all the studio stuff

The high points of the album are reached in their effort to imitate the sounds of Usa and Uk, Animals and Byrds. For example in the song "O, O, Baby Give Me That Show", the band really sounds fast and wild, and at the end a great organ solo.

This album is pretty hard to find, perhaps not, if you live in Holland but a very few recordings made it to America.

Buy me :
Les Baroques - (Complete Recordings)
Posted by The Bomber at 11:40 AM

Thanks for posting this. There is a band from Norway called The Pussycats you may also like. They released an album in 1966 called "Mrrr Mrrr Mrrr" that's great -- but now hard to find.

--Days of the Broken Arrows