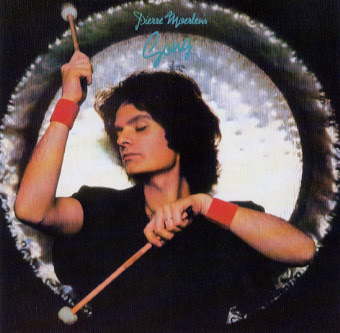 Although adorned with a cover destined for the museum of bad cover art and a title such waiting for fart jokes, Downwind features some exceptional music hidden within its grooves. Pierre Moerlen adding his name to the band's name may seem like an egotistical move, but it actually makes a lot of sense as this is not the "Radio Gnome" Gong at all. In fact Moerlen is the only holdover from that classic era. The psychedelia and whimsy is toned way down in favor for jazz/fusion and progressive sounds, although the band retains a gift for instrumental passages that take off for outer space and an extremely high level of musicianship, both technically and artistically. Besides, Moerlen continues to show his skill as one of rock's best drummers. When Acid Mother's Temple recorded a tribute album to Moerlen a few years ago, I was a little confused as to why they were lamenting a drummer, but after hearing albums like this and You, it makes perfect sense.

Lacking much of a psychedelic edge, my rating of four on the trip-o-meter may seem a little confusing. The simple fact is I find vibraphones to be sort of mind-shifting, and they show up on every track here. Moerlen is also extremely skilled and innovative on vibraphone, as is his brother Benoit who takes up the vibraphone duties on four of the tracks on Downwind.

The centerpiece of this disc is the title track, which is a sort of collaboration with Mike Oldfield. It's reminiscent of the works on Oldfield's contemporary Incantations album (also featuring Moerlen and an album that I consider one of my 10 desert island discs), and is equal to those tracks. The song features a few majestic buildups of percussive genius with Oldfield's instantly identifiable guitar serving as wonderful icing on the cake. Steve Winwood is also featured on this track playing synth, although his still complementary performance doesn't stand out quite as much.

Violinist Dider Lockwood contributes a couple standout performances near the end of the album. The sort of song suite of "Emotions" and "Xtasea" feastures him playing the melodic counterpoint to the vibraphone sound pads and makes for a wonderful, drifting sound.

"Jin-Go-Lo-Ba" is a cover of a tune by African drummer Olatunji. Usually a late 70's jazz/progressive cover of something like that would have me running for the hills, but again the Moerlen brothers' percussive chops save the day and make this another worthwhile addition to the album.

The album mostly instrumental, but "Aeroplane" and "What You Know" feature singing. Neither track is bad and they don't disrupt the flow of the album too badly, but singing is clearly not Moerlen's strength. On later albums the band would focus on purely instrumental compositions. "What You Know" does feature some fine lead guitar from guest (and former Rolling Stone) Mick Taylor.

Do not come to this album looking for octave doctors and pot head pixies or you will come away disappointed. With the high level of musicianship, phenomenal percussion, and great ensemble playing Downwind is still a worthy, if very different, successor to the Gong brand.

does anyone have a link for this? Thank you

and some other stuff:

Well, here it is! I just don't know how to make it on my own, so i guess Dr. should split it into separate posts.

Daevid Allen - Now Is The Happiest Time Of Your Life (1977)
Line-up:
Pepsi Milan, Juan Biblioni, Sam Gopal: Acoustic Guitar, Tablas and chairs
Victor Peraino: Synthi and stringboards
Vera Violin: Violin on 'Why do we treat ourselves like we do?'
Xavier Riba: Violin on 'See You on the Moontower'
Marianne Oberascher de Soller: Harp on 'I Am'
Daevid Allen: Vocals, Glissando and Acoustic Guitars
Tally & Orlando: Vocals


There'll be more some time later!

How To Nuke The Eiffel Tower http://www.megaupload.com/?d=PEXVJVIC

Death Of Rock And http://www.megaupload.com/?d=PA70NY0U