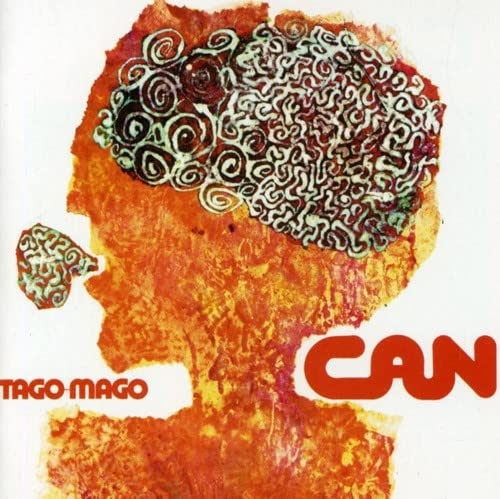 On Tago Mago we find the band at the start of their three album peak with Damo Suzuki. This is the band's first (and if we don't count the odds-and-sods Unlimited Edition, only) double album. The cover features what is actually a pretty smart visual pun for "blowin' your brains" out. It certainly works better that the crappy title puns the band would later use ("Saw Delight," "Flow Motion," blah!)

Tago Mago almost becomes an exception to the "double-album-that-could've-been-a-single" rule. There's a little bit too much experimentation on the second disc to make it, but it's usually interesting and the first disc is an absolute masterpiece.

The album opens with what is basically a three song suite of "Paperhouse," "Mushroom," and "Oh Yeah." While the band is uniformily strong, pretty much the entire first LP is a showcase for drummer Jaki Leibezeit. By this point he takes his place as one of the very best drummers in rock. The CD reissue liner notes speak of "Paperhouse" taking off and levitating, and for once this is not hyperbole. Leibezeit along with Karoli's perculating rhythm and some interstellar stabs from Schmidt's keys make the song really take off, glide above the ground, pick up speed, and slam into "Mushroom." The groove here is so infectious that the Flaming Lips would pretty much rip off the song wholesale twenty years later on their track "Take Meta Mars." Suzuki mumbles right through these songs glorious, stumbling gleefully through languages and gibberish and ranting about peeing off a bridge in Japanese (at least that how my wife translates it). By "Oh, Yeah," Damo gets the chance to emote backwards and does a damn successful job of it. It doesn't hurt that Holger Czukay and Leibzeit accompany him at their metronomic best as Karoli and Schmmidt provide aural window dressing.

"Halleluwah" takes up the entire second side at almost 19 minutes but never gets boring despite its epic length. Leibezeit manages about the most complicated beat that I imagine you could play in 4/4 time and the song still manages to be the funkiest track that anyone from Germany has ever produced. Our majestic moment her occurs when the beat briefly drops out, with the band shortly plunging back in at full lurch. "Halleluwah" might be a tiny notch below "Mother Sky" from Soundtracks, but being second to that track is still nothing to sneeze at.

The second LP of Tago Mago is a bit of a step down. There are lots of interesting ideas present but the band's modern compositional tendancies come to the fore and as good as these guys are, they're not Gyorgy Legiti or Steve Reich. "Aumgn" creates some soundscapes that would make for some great music to go along with Captain Kirk and Spock on the exploration of a new styrofoam planet, with lots of oscillated tones and Suzuki's delayed and reverbed mutterings before Leibzeit comes back in on the last few minutes to give another great demonstration of his drumming prowess. "Peking O" unfortunately drops Leibezeit's drumming, but Suzuki sounds creepier than hell and I love the moment where it sounds like he literally snaps and starts spewing forth high-speed gibberish. In fact the only thing here that resembles a song is the closing "Bring Me Coffee Or Tea," which is sort of like an after dinner mint.

Can's magnum opus may be a little impenetrable at times, but it's worth the effort. If you're new to the band, I'd spend some time with the more immediate first half before delving into the mysterious din of "Amugn" or "Peking O."

Labels: ---Songs of Psychedelic Insanity---, Can

Thank you Dr. Schluss for your review of Tago Mago. This is probably one of my most favorite records. I think it is one of the ultimate trip records ever. Every time I drive down DXM drive I often listen to this record and Soundtracks (Amazingly, Soul Desert is decent when high, well At least to my ears). This record always transports me to strange vistas that are beautiful in their Lovecraftian Distortion. Absolutely perfect in my book, includeing aumgn and Peking O. Oh, Dr. Schluss will you ever be reviewing various Artist Complilation?

Yeah, Tago Mago is pretty far down the mirrored corridor. I do consider it a masterpiece, but I think Ege Bamyasi is often overlooked in place of Tago Mago, so I wanted to aim some love towards the equally great okra record.

I don't have too many comps besides a few soundtracks, Nuggets, and some Brazilian comps. I'll probably get to the Brazilian comps, but in general I like to focus on single artist albums. Not that I'm inflexible. Any particular requests?

Muchas gracias for the re-up. I'm really excited to listen to this for the first time.