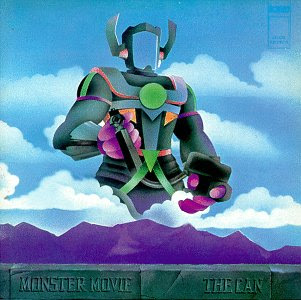 Monster Movie is Can's official debut album and the only one released in the 60's or 70's that completely features American vocalist Malcolm Mooney. Here, the Can sound is readily recognizable, although it's being used for entirely different means. After this Can would opt for a hypnotic space groove, but here they are still grounded in the acid rock psychedelia of the late 60's. Every prime period Can album has it's own identity, but Monster Movie stands out among even those.

Mooney's vocals are far better here than on the previous year's recordings. Even when going for a higher range like on "Mary, Mary So Contrary," and strange and charmingly off-key, but it no longer sounds like his throat is filled with nails and phlegm. Otherwise, he's amusingly ranting like on the great grooving opener "Father Cannot Yell" (because he hasn't been born yet! oh, I see!) or predicting 80's hardcore screaming like on the later part of "Outside My Door."

Actually there are only four songs present here, and I've already mentioned three of them. Side A of the original LP is slightly more song oriented and pretty strong. "Father Cannot Yell" for me is the first truly classic Can track. Side B is the notorious side-long epic that Can would later make a good name for. The 20-minute long "Yoo Doo Right" is pretty good and provides a showcase for Can's instrumental prowess, but it pales next to similarly lengthy tracks that they would produce in the next few years.

Plenty of Can trademarks are present here. Karoli's guitar tone and style appears here in full bloom, as is Holger Czukay minimal bass thump. Master drummer Jaki Leibezeit gets to show off his tribal yet metronomic beats on "Yoo Doo Right," although he would use them more effectively on later albums.

Monster Movie does mark the beginning of classic-period Can. Almost all the elements are in place here, only the purpose is missing. It's not the best album for a Can neophyte, but it's essential for fans. It's also the only place that they're listed as "The Can," and the superfluous article amuses me for some reason.

Dude. Thank you. For everything. Your site is brilliant and eye-opening.