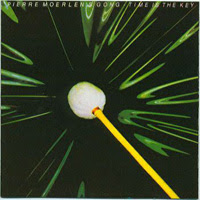 Released in the same year as Downwind, Time Is The Key represents another shake-up in the band's line up. Moerlen and bassist Hansford Rowe are in fact the only hold-overs from the last album. Fortunately, this doesn't result in a loss of quality and Time Is The Key stands as another great album.

On first glance, Time Is The Key seems to focus on shorter compositions with it's longer track listing. This is a little misleading as the band stitches several compositions into song suites. The first four tracks comprise one of these while the stretch from "Sugar Street" to "Esnuria Two make up another.

The first four tracks are by far the highlight of the album. The focus here is on a jungle of percussion, handled completely by Moerlen by way of overdubbing. It's a fantastic display, especially with the vibraphone playing, with the rest of the band simply adding keyboards and guitars to provide a bit of sonic coloring. As a suite, I even prefer this to the heights of Downwind.

From here the album picks up a strong jazz/fusion vibe. The more conventional instruments take up more of the center stage and provide for more ensemble playing. There are no vocal numbers as on the last album, so everything flows nicely. I guess as a reward for hanging around, Rowe gets one composition credit on "An American In England," although it's far from a standout.

The second suite here pales to the opening tracks, but still provides some highlights. "Sugar Street" is amusing white boy funk, while the drive of the bouncing riff of "The Bender" recalls the early 70's Gong. "Arabesque Intro & Arabesque" nails the fusion sound with some great guitar runs from Allan Holdsworth.

Not quite as consistent as Downwind, Time Is The Key does scale some high peaks. It's just too bad that the first side of the album is almost perfect (except for Rowe's still ok track), while side two doesn't display quite as much genius.

interesting take on pierre Moerlen's Gong. I have been kinda leery about diving into the Gong family (besides traditional Daevid Allen led Gong of course) and especially pierre Moerlen's gong after reading George Starostin's review of Shamal, Where he decries that gong has turned into a mediocre fusion band. Also i have yet to see a Pierre moerlen gong record at the record store i frequent. I have seen Shamal, do you know if Shamal is as mediocre as George Starostin says it is ?

I haven't heard Shamal. I imagine it may be more of a transition album. On these two discs, Moerlen and crew are not at all trying to live up to the rep of Allen's Gong. This is an entirely different band (and almost genre) that I think should be considered without thoughts of radio gnomes.

"Shamal" is mainly a very good jazz-fusion album. It suffers a bit from mediocre vocals by Mike Howlett but musically it is excellent. The follow up, "Gazeuse!", is entirely instrumental and is even better.

When it comes to the Pierre Moerlen's Gong, I really like the first four albums, "Downwind", "Time Is The Key", "Live", and "Leave It Open".

The fifth album, "Breakthrough" is, with the exception of one excellent track, an absolute disaster. It's commercial trash and Pierre Moerlen seems determined to determined to prove to the world that he can't sing.

The sixth album, "Second Wind" (1989) was a return to form. Benoit Moerlen is back, as is Hansford Rowe, and keyboardist Frank Fischer had joined the band. The first eight tracks are an updated version of what you hear on the first four albums with a bit more synth work. The last three tracks take up 30 minutes and are nothing but pure drumming by Pierre Moerlen and Alex Sanguinetti. I can't listen to that part of the album. It does nothing for me. Fortunately there was 40+ minutes of excellent music before that.

I haven't heard the last two albums... at least not yet.

I like Shamal, despite the critciism it got, but then I like Jazz fusion. i would have to agree that its a very different sound to traditional Gong, so I can see why it disaapointed some. I haven't heard these albums though, am I missing some links somewhere or are they not avilable?

I have all (as far as I am aware) Pierre Moerlen's Gong cds and 'Time is the Key' is my favourite. jjp