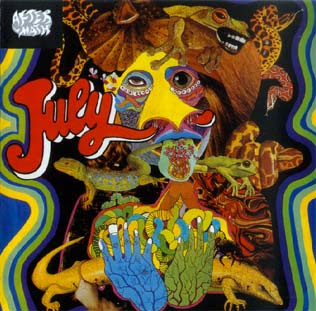 Armed with a wild cover that looks like the unfortunate result of a jungle-bound datura adventure, July is a classic piece of psychedelic pop with a pulsing rock edge. July's sound owes a big debt to the UFO scene of 1967 (early Pink Floyd, Soft Machine). They aren't thieves, however, and are much more song focused than those that were focused on 24 hour technicolour dream. Armed with some great songs from primary songwriter (and later Mike Oldfield engineer) Tom Newman, July managed to create an above average slice of psychedelic pop. Also, July's tonal style benefits from the wide pallet of guitarist Tony Duhig. Bypassing the jazz leanings of much of the London psychedelic scene, Dugig contributed some wild San Fran-esque acid guitar and Indian leanings.

The July album is frontloaded with its best songs. "My Clown," "Dandelion Seeds," and "Jolly Mary" are all overlooked classics. "My Clown" was the proper single and has found respect in many collector circles, while "Dandelion Seeds" makes some very natural and inspired sounding tempo shifts. "Jolly Mary" features some cool sound effects and comes across like a top shelf Syd Barrett outtake. Later on "To Be Free" also earns positive comparisons to prime Barrett with a liberal dose of Lennon-esque vocals slathered on.

Many tracks on July feature a demented and almost out of control reverb/delay effect on the vocals. While it is a gimmick, the band uses it quite well and I don't think I've heard the particular sound everywell else. The general production is good, if a bit muddy sounding (or it could just be my reissue). Fortunately, this slightly gritty sound also becomes a benefit. The band sounds a little gritty and saves a few of their more whimsical leanings from sounding too twee.

July gets some great mileage out of some other shoud-be-gimmicks. The sitars and unnaturally heilium-drenched vocals add some great color and juxtapose well with the slamming rhythm section and flights of acid wailing guitar. It's not as poppy as the opening tracks but the epic feel (at three-and-a-half-minutes) makes it my favorite on the album. An alternate take here as a bonus track is still good, but puts in relief the production of the proper album.

The only track here not written by Newman is "Crying Is For Writers," written by the drummer Chris Jackson. It's not quite at the level of Newman's songs, but still fits in nicely on the album. I guess you've got to stroke your drummer's ego a bit sometimes.

If there's a negative here, it's just that the second side of the album doesn't sparkle as much as the great songs on side one. It all holds up quite well, even if we find the band recycling "Jolly Mary" a little once we reach the closer "A Bird Lived."

July is right on the verge of experimenting with prog rock, but the balance definitely falls on the psych-pop side. This is the sort of album that belongs in a time capsule for those of us that have finally burnt out on the amazing, but easy to find Piper At The Gates Of Dawn.

I was lucky enough to pick up this album many years ago. I agree with most of what you said - I think the album gets progressively weaker as it goes on but the first three cuts are well worth the price of the album. Plus they were very young when they put all of this together.

I've only recently discovered July but I rate it very highly among the prog-psych LPs of the late 60s. In fact, I'd much rather be stuck in a lift with it than, say, "Satanic Majesties", Tomorrow or the first Soft Machine album. I love the leslie'd vocals, Tom Newman's "punk-ish" sneer, Alan James brilliant bass-playing and I don't believe there's a weak song on the album. My faves would have to be "Dandelion Seeds", "Hallo To Me" and "Friendly Man". Some of the instrumental passages point towards future bands like Can and Hawkwind as well. Pretty groovy, actually, and the "novelty" songs - such as "Jolly Mary" - have, like "Yellow Submarine, fared better over time than the likes of some of Syd Barrett's ouevre.

Andrew's comment above is very enthusiatic indeed and I can see his point and appreciate the comparisons but can't help thinking it's because he had recently discovered it and rightly overjoyed by it...Also just somebody else's point of view I suppose: personally I wouldn't rate the first Softs LP or Tomorrow below July being both all-time favourites but yeah I couldn't believe it when I first heard the Bam Caruso reissue around 1987...they were totally unknown to me and what a wonderful surprise it was!!!
They just played London few days ago...and reportedly were amazing...