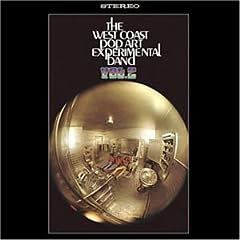 It's easy to feel sorry for the members of The West Coast Pop Art Experimental Band. They endevoured to produce some pleasant psych pop, but were sidetracked by svengali-rich boy Bob Markley, who really had no talents that suggested that he should even be in a band. In the end, however, Markley could certaintly project his personality onto the music, and for me is a singer/tambourine player that I love to hate. By the band's second album, he had squirmed his way into a writing credit on every song. From a pure art perspective, this was a disaster, but it does make Volume 2 a far more entertaining album than Part One.

Where as the cover songs on the first album were a much needed crutch, Volume 2 consists of all originals. The band's songwriting skills are still far from eviable, but they have improved and the band manages to hit a few bulls-eyes here. The classic so to speak is the six minute long "Smell Of Incence." It remains awash in psychedelic cliches, but hits upon them in a more archetypal way and the tracks includes some great psych jamming. "Buddha" is also a great smokey-sounding track, and "Tracy Had A Hard Day Sunday" is almost well constructed song that Markley seems to be trying his hardest to derail. As I said, this is more of an entertaining album than a musical masterpiece.

On other tracks, the West Coasters try to live up to the "experimental" part of their name a bit more. Many of the other tracks include some amusingly mismatched musical part juxtaposed with some sound clips. In painting terms, we find a lot of random splatter paintings here. "Suppose They Gave A War And Nobody Came" seems to be the band's attempt to relive "Help, I'm A Rock" from the last album, but the overly obvious protest sentiment works better with the ham-fisted experimentation.

I prefer this album a lot to Part One. In pure musical terms, this is mostly a step down as the band is busy misguidedly playing with their studio toys, and the group member with the least qualifications seems to be working overtime. Still, the original songs are definitely better, and the pure amusement value of Volume Two is difficult to be matched in the Garage of Psychedelic Obscurities.

If you would like to publish your updates on the Totally Fuzzy blog, you can do so yourself now by posting the updates as a comment on this page.

PS : a link back to us would be appreciated ;)

Groovy! Thanks! Will do.

one of best us psychedelicrecords from does days !

The link is incomplete!