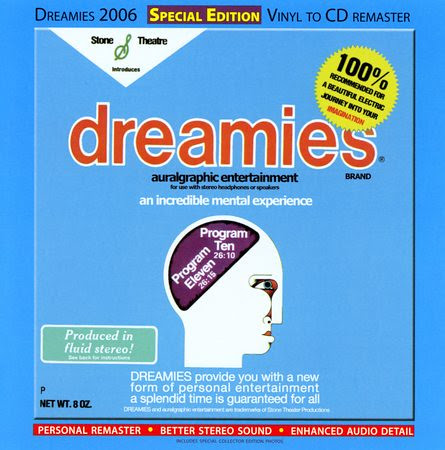 Bill Holt's Dreamies is a strange creature indeed, created without any real hope for an audience and flush with experimentation. The story here is that Holt was a 9-to-5 salaryman who simply snapped a little and used this as his escape valve somewhere in the suburbs of Philadelphia (Delaware to be specific). The album is very much a home recording project with Mr. Holt using only an Ovation acoustic guitar, a Moog Sonix Six synth, and a whole mess of found sound.

The main reference point here are the more psychedelic works of the Beatles, but in a very sideways manner. There is a serious music concrete asthetic as work here, much like on the White Album's often derided (but I consider great) "Revolution #9." In what must be direct reference to that track, Holt has entitled the two sides of the album Program Ten and Program Eleven. Especially Program Ten, there is a little more musical thrust here as Holt penned a few simple Lennon-esque acoustic folk tracks that drift through the waves of sound.

It's the construction of the album that pushes Dreamies past ordinary into the realm of being possibly great. Holt's songs, while recalling Lennon, are not notable in their own right, even though they are pleasant. Program Ten's "song" floats on with the same four strummed chords and some trippy lyrics. Synth blasts and the strange sonic disruptions slowly mold and vary the sound of the track. Although they would come much later, much of this makes me think of a very stripped down folk-infused Olivia Tremor Control.

Thus, the main attraction here is really the disembodied radio voices (including reports of moon launches and boxing matches), environmental sounds, and the alien presence of the very analog sounding Sonic Six. In fact, on Program Eleven there is much less presence of anything resembling a conventional song as Holt pushes his muse into a swirling pit of found sound.

This is the sort of album that the listener can simply float downstream with, or focus more intently to appreciate the sound construction. It's wildly experimental, although retaining just enough of a popular touch that is remains accessible. At best it's testament of the common man to latch on to inspiration and create something innovative and new. After hearing Dreamies, no musician really has an excuse not to at least try and record something. Maybe someone will still play it 23 years down the line.

thank you for some very obscure and fluid musical posts!

Thanks! I do what I can although my turntable is trapped on the other side of the planet!

thanks for posting that album has to be one of my favorite albums i have heard yet and have only listend to it once so far :P

Very cool and trippy album, thanks for sharing this. I'm definitely going to buy this one sometime.

fascinating and enjoyable album with an atrocious cover that doesn't even pass the "it's so bad it's good" test ... time for a repackaging

I'm loving this. For me, the Doctor is very much in the House.

Thanks for this. I'm loving it after two listens.

Great blog, but you keep posting stuff I've been planning to post on my own blog.

Doug,
It looks like both of us are concentrating on reviews, so I have no problem if you post a few of the same albums I do. You've got one or two I'm still planning to tackle sometime!

Thanks for appreciating my album after all these years.

put the link back up. You removed it because "bill holt" replied? No one will buy this without hearing it first

This album is incredible! A must have for anyone interested in sound collage.

hope you'll reopload these record that looks so interesting !

- A short while ago I discovered "Dreamies" through that wonderful cornucopia youtube and purchased a re-issue. Just run it on my turntable and boy ... it's so gorgeous and awesome! Rarely heard another record that hit so perfectly the state of my younger, psychedelized self! Ready to escape to outer space worlds on the one hand, saddened and worried about the (already then) alarming state of the REAL world contrariwise. It's been a long time since I listened to a whole album concentrated in one piece and without any distraction. This album managed to get me into that rare situation again! Thanx, Bill Holt, for taking the risk! -