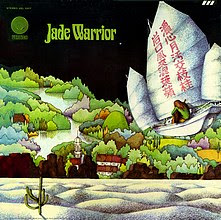 After July died the quick death of so many psych-pop bands, guitarist Tony Duhig and flute guru Jon Field resurfaced a few years later in the longer-lasting Jade Warrior. This time the balanced fell firmly on the prog-rock side of things, but Duhig and Field's talents as sound-sculptors was even more pronounced and this initial offering from the band is a richly textured, wonderful piece of work.

As many prog rock albums do, this album drifts from song to song, with the breaks not necessarily clearly staked out. They don't, however, attempt to create the multi-suite prog epic, which to be honest usually leaves a bad taste in my mouth.

The instrumentation here is almost folky, with lots of strummed acoustic guitars, hand percussion, and Jon Field's flute part standing toe-to-toe and sometimes bettering the better known works from Jethro Tull. Duhig works in some great fuzzed out acid-soaked guitar which stands as the clearest link to the earlier July. Notably, there is no drum kit at work here, but the hand percussion does such a great job filling in the rhythm that I never found myself missing a proper rock drummer.

It's almost useless to point out single tracks here. The allmusic guide suggests that this album be listened to as a whole and for once they may be right. The disc flows from Indian-inspired, meditative passages to the more western pop sections without a hitch. Listening now, I have to look at my media player to even figure out when we've reached the next song after the opening
"Traveller." This means there's not a whole lot of sonic diversity, but seeing as the album forms a drifting whole, this ends up as an plus on the scorecard. If there's anything here resembling a single, I guess it would be "Psychiatric Sergeant." It's not something that I'd expect to hear on the radio, but it's the closest thing to Tom Newman's songwriting in July. The main thing carried over from that band is a superior talent for song design.

The vocals from Glyn Havard are extremely strong and add some firmness to the often airy proceedings. Falling into the prog rock trap, however, are the lyrics. They are pretty wretched "expose your mind and commune with the serpent" sort of ranting. I recommend you enjoy the tone of Havard's voice and don't try to pay too much attention to what he's saying.

Getting back to the positives, the production is extremely clean and nuanced, with every instrument easy to pick out but not standing out above the mix. This is also a good headphone album with tastefully panned guitars and a widescreen placement of the instruments.

If you're looking for an Indian-folk-psych-prog album, you can't do much better than to spend time with Jade Warrior. It shows great musical evolution from the constraints of 60's pop, and really does deserve more recognition (except for the lyrics).

Note: I got these mp3s from another music blog, but I can't recall where. If you're the original poster, please drop me a note and I'll make sure to give credit where it's due.

Thanks for this one and the July album. I hope you'll post more Jade Warrior. I particularly want to hear their album "Floating World."

I'd like to hear "Floating World," too! I did track down a copy of "Waves," though, so I'll get to that one soon.

Floating World's okay, but the best are the next three: Waves, Kites, and Way of the Sun. These four are available as one double CD, so buy that one, is my advice.

THANKS! This is sweet - very good to leave lurking. I'll be picking up a copy from the local secondhand asap. If d/l'ers like this, perhaps try Spoonfed Hybrid self titled (4AD 1993). Some similar sparseness and tones, but a more melancholy feel.