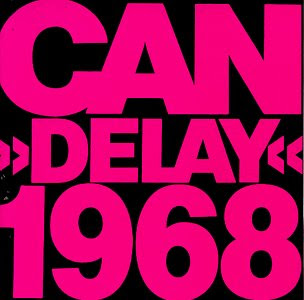 This release actually documents the time leading up to Can's debut album, so I guess this is a proto-debut. At this point the German-based Can had not really fallen into their innerspace niche yet and featured American growler Malcolm Mooney on vocals. Delay 1968 features a very exploratory sound and tends to fall prey to conflicting goals within the band.

Can would eventually discover a cosmic groove based on repetition and lock-step rhythms, but at this point they were flirting with simple underground garage-psych inclinations. Not helping the matter was Mooney who seemed to be searching for the rock song that the rest of the band wasn't going to write.

Mooney had an avant-garde edge, but it tended towards more of a freak-beat sound. When going for a R&B sort of shouting, Mooney is quite effective and his strange spoken stories tend to work out ok. When he tries to sing, however, his voice sounds like sandpaper on gravel. His higher range is truly cringe-inducing.

I tend to compare Mooney to the similarly deranged sounding Wesley Willis. Of course, where Willis seemed to actually be unhinged, Mooney simply puts on a convincing act that does have some artistically inspired though behind it.

The opening "Butterfly" has all the elements of the Can groove, although it hasn't quite gelled into coherance yet. Mooney starts off strong but as the song barrels on, he doesn't seem sure how to continue and just keeps on ranting. Inspirationally, he falls behind with Can's epic groove and the song sounds at odds with itself. Fortunately on "Uphill," Can gives an early flash of their full power with and amazing lockstep beat and makes up for the fact that Mooney eventually sounds sort of lost (although the track ends rather abruptly; is my CD defective?).

On the other side of the coin, "Nineteenth Century Man" plays more towards the song end of the spectrum. It's like something from one of the stranger freakbeat compilations. "Thief" and "Man Named Joe" are ruined by Mooney's "sandpaper-on-gravel" voice and the rest of the band doesn't really manage to salvage what's left.

The closing "Little Star On Bethlehem" start off with a strange and amusing Mooney story before he returns to his higher register. I can deal with it here, but the groove still isn't special enough to make this a standout.

Your appreciation of this album will probably rely on your appreciation of Mooney. You may notice that I haven't said anything about the rest of the band. While many of the elements that would make Can spectacular are on show here, they haven't quite coalesed into a complete unit. Keyboardist Irmin Schmidt seems particularly at a loss how to fit in here and drummer Jaki Liebezeit is impressive, but not the polyrhythmic robot that he would soon become. That said, guitarist Michael Karoli does manage in some awesome riffs and gets a little more space here than he would on later albums.