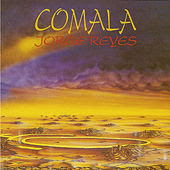 This little confection is a bit of a detour from the typical psychedelic obscurity. We usually focus on the psychedelic pop, tripping down Carnaby Street sort of music. Jorge Reyes is a musical mystic, and this is more of a sitting with the shaman in the middle of the jungle, sipping ayahuasca, and seeing spirit animal serpents climbing up your leg type of music. There is a mysterious, primordial sound at work here and much of it has an almost ceremonial feel. Reyes' roots are clearly of the ancient, distorted pre-Columbian sound of Mexico, but he is a master of mixing this influence with modern (well, at least 1985) electronics and ends up creating amazing soundworlds.

The opening title track takes up about a third of the album and it is quite a journey. Reyes' comes straight on with some awesome percussion, mixing it with some truly dark synth sounds. About halfway in, we start to hear some chanting mixing with creepy whispers from the jungle and a truly satanic sounding, electronically-enhanced voice.

While remaining a coherant whole, Reyes continues to sound-paint distinctive images throughout the album. "Nadie Se Libra En Tamohaunchan" and "El Animal Sola" are maybe the most accessible tracks with more familiar synth tones and some elements of modern dance music. Even better, though, are "Adios Mi Acompanamiento" and "La Diosa De Las Aguilas," which seem to start with a sound like the instrumental b-sides of Bowie's Low and Heroes, and builds on that template with Mesoamerican colors. The chanting on "Hekura" freaks me out in a good way.

This album is apparently based on a book called Pedro Paramo by the Mexican writer Juan Rulfo. I've never read the book, and the cinematic sound here is strong enough that I don't think I really need to. For me, this aural paintings go along nicely with the painted visions of Peruvian shaman Pablo Amaringo (look here: http://www.pabloamaringo.com/).

I'm not a new age freak at all, but this music is visceral enough that it demands my attention. The only flaws here are a couple of tiny production touches that sound a bit cheesy (like 2%). But since this was recorded in the production quagmire of the mid-80's, I'd say this album beat the odds and ended up with a nice warm sound. This is a great find that should conjure up a few visions of your own when listened to in the dark.

Thanks Herr Dr Schluss,
This one is supposed to be good too:
Jorge Reyes. Mexican Music: Prehispanic Rituals
Ethnic
http://rapidshare.com/
files/24904147/Dokolumb_ritualy.rar

A lot of folks get put off by the label "new age", for good reason, but there are many good records that get lumped into this category that are really quite dark and menacing, eg some of Steve Roach, Lightwave, Anuguma.
Thanks for the great postings!

Thanks for the link! After a few listens I might give that one a review too. Finding cover art might be a bitch though.

Herr Dr Schluss, I had linked your blog already. Tranks for your comments.
Minie
http//1967psycho.blogspot.com

hey great blog i put your link in my blog..