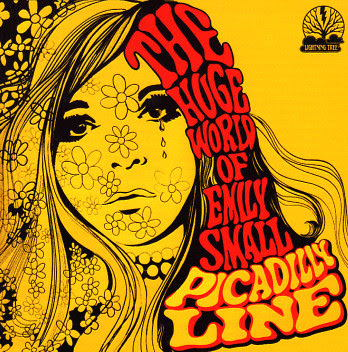 Picadilly Line's sole album is a textbook example of psychedelic pop, with a strong emphasis on the pop. I guess that the music tends to slip into the "toytown" subgenre that ran rampant through the U.K. in 67-68, but I find this music far more palatable than the average stuff in that classification. I think that's because whereas the typical British group of the period reaches back to music hall traditions for their whimsy, Picadilly Line opt for a more folk-ish style of song with some very Simon and Garfunkel like harmonies adorning the music. It's more like gauze for the ears than the syrup that you get with a band like Nirvana (the 60's British band, of course).

The songs on the album are strong throughout the album. The opening title track is a fine number that seems to suggest the opening of a concept album, but as far as I can tell the other songs are more of a collection of "could-have-been" singles than having any conceptual link. Really, the entire first side of the album presents us with a string of mildly folky psych pop numbers punctuated with some chamber orchestration (y'know, the 90's tag of 'chamber pop' could easily apply here). The band maintains a very consistent quality level, but if you want a highlight, I'd go for "At the Third Stroke." "Gone, Gone, Gone" picks up the volume level a touch, but it 'rocks out' in the same way that the afore mentioned Simon and Garfunkel might have.

With the second side, the band throws in a touch of Dylan influence. This is obvious from their groovy cover of "Visions Of Johanna," but I can hear it in the phrasing for a track like "Tumble Down World" too.

My copy of this isn't really clear where the bonus tracks begin on the disc. As I said, if there was supposed to be a concept, it didn't really work out and my liner notes are all in Japanese. I'm going to assume that "Rosemary's Bluebell Day" starts of the extra content as the production sound is different and it sound tailor-fit as a lost psych single. It's also one of the best tracks on the disc with a fine chorus and a killer bridge.

I'm not sure if the bonus tracks, precede the proper album, follow it, were plans for a scrapped second album or what. I'm thinking secong album as the production is a little less clear and goes more for a wall-of-sound aesthetic. The orchestration is also a great deal thicker that the delicate chamber stuff from the proper album. "Yellow Rainbow" is another bonus standout with a touch of a raga-rock vibe thrown in, and even a some slightly fuzzed guitar.

This is a very poppy album, but one of the better ones I've heard from the U.K. I'd rank this just a touch below the classic Hollies albums from the same period. You're not going to freak your mind into the 7th dimension with Picadilly Line, but you will get some top rate harmonies, songwriting, and chamber sounds.
Posted by Dr. Schluss at 10:31 AM

Looking forward to hearing this, Thanks.

Great pop sike... just taylor-made for me! Thanks for sharing this album..

A genuine effort of 1960;s perportions. Thanx for this album & all the other great tunes on your fabulous site...

please give links once again. they are not complete. Thank a lot!))

You have to scroll past the window for the complete link or open the comments in a new window. Everything is there.

Ohhh. Thank you! you helped me strongly!! ^^