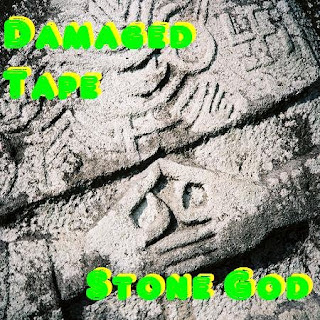 Judging by the download statistics, a fair amount of this blog's readers at least took a passing interest in the Glaze Of Cathexis recordings. Hopefully you dug it. Here's the other side of the coin. When I'm not in the mood to sing or write lyrics, I delve into the more electronic side of music making. Many of the Damaged Tape tracks I make are used in the microbudget Gonzoriffic films, whose link you'll find further down this page. I use this outlet to work out my Tangerine Dream, Klaus Schulze, Air, Underworld mojo. There's a few accidental David Gilmour impressions in the latter half of the album (or side B if you'll indulge me). The recordings for this album were all made in my little apartment out in Ueda, Japan from October 2006 up until December 2007.

The photos in the artwork are from an October voyage to a stone god in the middle of a rice field in Suwa, Nagano, Japan. It's several hundred years old, but has some very Aztec/Mayan looking carvings on it, which is pretty mysterious. Apparently there was an incident where the thing started bleeding from the back after someone tried to quarry a bit of stone from the back of it. Freaky! The best photo from the trip was a double exposure with the god and my Australian buddy Scott. It's so cool that I thought of passing him off as me in the insert, but I decided that would be far too lame.

As always, I'd be very happy if some of you other bloggers would be interested in reposting this (I'd like to know about it too, if possible), and I'm happy to hear everyone's comments. If this stuff isn't your bag, the next Glaze Of Gathexis album is a good 60% finished and will show up in a couple of months. And of course we'll continue to hear about plenty of albums here that are not by me.

Excerpt from the review:

"Stone God" is not an extremely experimental recording, it is rather relaxing and makes one feel quite comfortable. Ideal for cooling down after some hard day of labour (or whatever...).
Soundwise it is rooted a little bit too much in the 80's synthesizer and drum sound for my taste (reminding me somehow of the late TANGERINE DREAM, whose later work I like much less than their earlier stuff), but nevertheless "Stone God" is a good work, that grows with every new listen. And the guitar playing is great, indeed reminding of one Mr. Gilmour's style. (By the way, Mr. Schluss, I miss your Trip-o-Meter valuations for your work. I'd say 3,5 out of 5.)

Thanks for the post! I'm glad you dig it! I don't really feel qualified to rate my own work on the Trip-o-Meter, so it's interesting to see your rating.