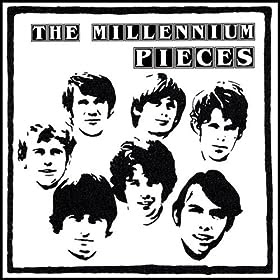 Usually an odds and sods compilation is simply a nice bit of musical archeology for an artist. For the Millennium, however, these late 60's recordings are absolutely essential. As a functioning band, they only managed to release one album, although I consider it to be one of the best ever, so anything else of their's that we can scrape together deserves at least my rapt attention.

The guiding light of the Millennium's Begin album was very clearly producer and vocalist Curt Boettcher, but this disc shifts the focus to some of the other exceptionally talented band members like Sandy Salisbury, Joey Stec, and Lee Mallory. In full disclosure, this compilation doesn't even attempt to match the amazing vision of the Begin album, and there are definitely a few bland tracks present here, but the bulls eyes are absolutely phenomenal.

There are a couple demo-quality renditions of tracks from Begin, but I don't consider those to be much more than a fleeting curiosity. Where this disc really shines is in some of the outtakes and tracks earmarked for the band's never realized second album. In this category is the blast of country-tinged sunshine psych "I Just Don't Know How To Say Goodbye," the truly groovy "god People," and "Suspended Animation," which managed to realize the tag of 'cosmic American music' in a way that neither Roger McGuinn or Gram Parsons quite managed. In general, the tracks here veer a little more into the country rock territory than the band's earlier recordings do, but when it gets matched with a fully realized sunbleached Boettcher production, the results are truly magical.

This is not where you want to start with the Millennium. The Begin album gets my absolute highest recommendation, but I promise that you'll be thirsting for more, and this is the best place to look for it (along with Sagittarius' Present Tense).

I especially like that Begin song... The Island. Wacky - good.

Hi - just discovered your great site! Thanks for the info on The Millenium - I'm a big Association fan and didn't know this stuff existed - I stumbled first upon one of their songs via Pandora. Also thanks for the Chocolate Watchband info -I grew up in Monterey and they were out of San Jose/Bay Area and played in town in the late 60's periodically - I had never seen them live back then but it is great to rediscover them. Best - dm

Awesome. Thanks for posting this rarity. I've been listening to Begin for the last couple of weeks, so I look forward to hearing more. Cheers

Hi, I just downloaded this a couple of times, and when I would try to un-zip it (with ExtractNow), the app would tell me that the files were broken. Is it something I'm doing wrong, or have the files gotten damaged at Rapidshare? Thanks!

I'm not familiar with ExtractNow. Could it be that? WinZip should do the trick.

Finally got it to work with WinRAR. Thanks!

Thanks for this - thought that the 3CD Millennium comp "Magic Time" was the last word on these guys - but this is cool too. Thanks!