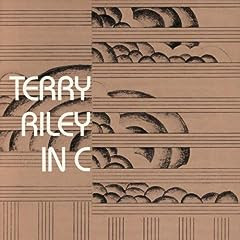 One of the seminal minimalist works, Terry Riley's "In C" is much more open to interpretation than most compositions. The music is simply a set of charted instructions that give each player a basic phrase to play for an indeterminate period of time while a pulse continuously throbs in the background. The instrumentation and length of the piece is completely left up to the musicians to decide. As such there are many very different sounding recordings of this piece, but today we'll be looking at the first album featuring the piece along with Mr. Riley himself as part of the ensemble.

This version is played by a relatively small group of about ten musicians. It's a little sparser than some later recordings, but certainly has no problem creating the hypnotic vibe of the music. Running here at 42 minutes, "In C" either requires your complete attention or to float around in your subconscious as truly psychedelic background music. The motifs and tonal colors slowly shift although there is little melody for the listener to latch onto. The also great "A Rainbow In Curved Air" almost seems like bubblegum pop in comparison with the theory-guided tapestry of I consider this one a strange and alien musical world that is very worth exploring. Detached from the normal realm of compositional logic, his could be the blinding light that helps lead you into aural enlightenment if you're able to stand the glare.

If you happen to find yourself enjoying this, you may feel compelled to make a little side hobby of the very different renditions of this piece. With hindsight clear in the rearview mirror, Riley participated in a recording of this 25 years later with a much larger ensemble in a recording that is well worth your while. There is also a very different post-rock injected 2001 recording from Bang On A Can that cast the music in a very different light. There's probably no better place to start than the source, though, and this is it.

Aaaaaahhhhh ... the more I listen, the more there is. I liked it less at the time of release, always preferred "Rainbow", but now this gets played more. Exquisite. And one of the very great pieces of music to trip by, if that's your thing.

What a fantastic blog!! There's some wonderful stuff here, and i appreciate you sharing it!
Thank you, doctor!