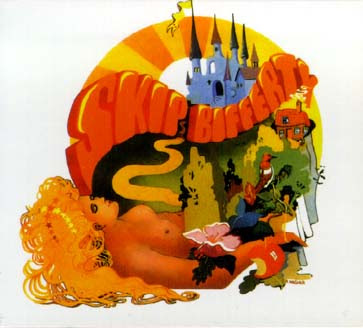 Ah, you couldn't possibly go wrong with a name as oddly lysergic as "Skip Bifferty," and fortunately this release doesn't prove me wrong. Although the fairy-tale cover suggests a very twee psychedelic album, Skip Bifferty goes for a somewhat grittier sound. Their instrumentation deviates a little from the norm, with the backbone of the sound being compressed drums, throbbing bass, and piano, on top of which the group slathers on some fine harmonies.

"Money Man" is a strong, catchy lead off track that sets the tone pretty well for the rest of the album with the piano based sound, super harmonies, and a few well placed sound effects and sparing fuzz guitar. Yet the best track, "Guru," veers off in a very different direction. The tune only features vocals and a wall of percussion, but is so well done that it deserves a spot as one of the best U.K. psych tracks to show up in 1968. It a little like The End's "Shades Of Orange," but arguably even better. "When She" features an almost Black Sabbath-like melody, but it's like Ozzy's crew recast as piano pop, if that makes any sense. "Prince Germany The First" is another piano pop standout. For a more filled out band sound, head for the great "Jeremy Carabine," "Time Track," or the awesome bouncy guitar riff and choir-boy vocals in "Gas Board Under."

If I may, I'd like to sketch out a couple reservations that keep me from really loving this album. It's some of the same things that keep me at a distance from the Small Faces, and indeed that legendary band produced "Man In Black," Skip Bifferty's final single. While the production is generally very well thought out and interesting, when the band thickens up the sound, it's a little muddy and messy sounding to my ears. The best sounding songs (as in not the actual best) here are the more sparsely arranged ones. Like Steve Marriott in the Small Faces, Skip Bifferty possessed a fine vocalist with a voice perfect for Rhythm & Blues wailing. Unfortunately, I don't feel that such assertive vocals work so well in the realm of psychedelia. Graham Bell may be the superior vocalist here, but I tend to prefer it when the other fellow sings lead, just like Ronnie Lane taking the lead vocal duties form Steve Marriott. I sometimes have the same issue with Steve Winwood's vocals on the early Traffic recordings. My personal definition of prime psych vocals include a slightly detached sound and not the fully engaged howling of a R&B vocalist.

The bonus tracks here are basically a clearing house for the band's singles. We find the harder rocking "On Love," where Bell's vocals really shine, matched with "Cover Girl," which seems to be trying to convert "God Rest Ye Merry Gentlemen" into a rock song. There's also the Small Faces collaborated "Man In Black," and the truly strange "Schizoid Revolution." This eight minute number starts of as an organ coated psych rocker before descending into an insane black hole of sound that sounds like the Red Crayola's first album.

This is one of the best psych albums I've ever heard. A great, distinctive sound.

I've got this on CD, and your review is spot on. Great blog, been a fan for a while now!