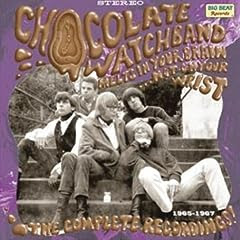 Usually I prefer original albums to compilations, but Melts In Your Brain... Not On Your Wrist is not only a definitive document of what is arguably the best American garage band, but rights some horrible wrongs perpetrated by the band's producer and record label on the original LPs. You see, along with the Electric Prunes, the Chocolate Watchband is a quintessentially infamous example of a very talented band getting used and abused by the record industry. None of the original albums (No Way Out, The Inner Mystique, and One Step Beyond) featured the classic line-up for the length of the whole album. No Way Out contained a few authentic Chocolate Watchband, although producer Ed Cobb altered many of the band's performances with pointless overdubs or by replacing vocalist David Aguilar with the fine, but superfluous Don Bennett. Since the proper band had long since split up by the release of The Inner Mystique, we find four outtakes of the band along side recordings by completely different groups (although still credited to the Watchband. One Step Beyond does feature the same group for the length of the album, but it's a reconstituted band with a different line up that doesn't hold a candle to the original. Fortunately, this wonderful set gets everything in order by throwing all of the untainted Chocolate Watchband tracks on the first disc, and getting all the random surgery jobs and different bands on disc two.

As such, disc one is the main event here. The music plays pretty well as a collection (marred only by the fact that the compilation producers left in some studio chatter and false starts), and finally gives us a full image of the greatness of the Chocolate Watchband. The band wails away relentlessly, channeling a mildly psychedelic mid-60's Rolling Stones' groove, although unlike most band influenced by the A-listers, the Watchband often sound possessed in a way that even the Stones never managed. David Aguilar sounds an awful lot like Mick Jagger on the surface, although he also comes across as way more wild and out of control. The Dylan cover "Baby Blue" sounds like a prime outtake from Aftermath, although I doubt that even the Stones would have managed to rip this one apart quite as convincingly. While we're on the subject, "She Weaves A Tender Trap" sounds like the best song that wasn't on Between The Buttons.

They also managed to show the Yardbirds up on "Sitting There Standing," where guitarist Mark Loomis pounds the great guitar riff even farther into glorious raunch than Jeff Beck could. I'd be amiss not to mention the band's prime nuggets, "Let's Talk About Girls" and "Are You Gonna Be There (At The Love-In)." "Love-In" sounds great as always, but "Let's Talk About Girls" is even better as David Aguilar finally gets his voice on the track. He had to record the vocal in 2005, but I have to admit that I would not have noticed if it hadn't been touted as such in the line notes. Other highlights include the truly weird surf rockin', Zappa anticipating "Loose Lips Sync Ships," the face pounding "Medication" (also with a 2005 Aguilar refit), and a couple more covers that are better than the originals with "I'm Not Like Anybody Else" and "I Ain't Know Miracle Worker." Nothing on this first disc is bad and it's one of the best hours of prime garage psych that you'll find anywhere.

Disc two compiles everything erroneously credited to the Watchband. When on the proper albums, this stuff does nothing but breed contempt as we're not hearing the proper band, but given room to breathe here we find that much of it is quite good. The first eight tracks are the tunes manhandled by Ed Cobb. We find Don Bennett begin brought in to replace Aguilar on several tunes. He's not a bad singer at all (except when parodying Aguilar on "Let's Talk About Girls"), and adds a little big city soul to the sound, but when replacing a great singer that fits into the group's sound like a glove, hearing Bennett on the original LP is more than a little disconcerting. As alternate versions hanging out on a second disc, it's pretty enjoyable. There are also tracks with additional overdubs, such as the ones on "Baby Blue" which almost manage to bury the superior original track. Cobb seemed to have a thing for crappy, atonal flute and horn parts. Once again, they work much better when I can compare and contrast it with the band's unadulterated vision on the first disc.

Then we get all seven tracks of One Step Beyond. Unfortunately, this was a substitute Watchband and comes across as somewhat bland late 60's psych folk. It's not an embarrassment by any means, but it commits the sin of being pretty dull. It's strictly C-list stuff, although very competent C-list.

Best of all, we get six instrumental tracks that padded out the first two albums. Amusingly, the Watchband had absolutely nothing to do with these tracks- and they very much sound like it. Ed Cobb brought in some pick-up bands like the Yo-Yoz to record some exploitation psych, especially on the Inner Mystique where there wasn't enough Watchband material to finish the album. In a wonderful freak chance, this is some of the best psych exploitation I've heard, easily matching the Zodiac and David Axelrod's work with (as?) the Electric Prunes. It's makes for 20 minutes of some of my favorite guilty pleasure psych rock, garnished with flamboyant fuzz guitar, electronic noise, phasing effects, and of course sitar.

This is an amazing compilation that finally brings one of the 60's absolute best garage psych bands into sharp and revealing focus. It also releases the other material from the shame of obscuring the band and gives it a fighting chance of it's own for acknowledgment. In addition, there are some great, informative liner notes, and the remastering throughout is absolutely sparkling. You should buy a copy of this for yourself and a second one for your best music buddy.

It's interesting to see both the track "Loose Lip Sync Ship: The Hogs" and "Gossamer Wings" on this compilation. I had been familiar with both, and had noted that the basic track was exactly the same on both numbers. However, given all the stand-in recordings peppering the Watchband's original albums, I had always been convinced that The Hogs were an incognito Zappa/Mothers product. Now I know--it was the Watchband who was incognito!

I had no idea the watchband's music was altered so much it's a crying shame how they were abused and mislead like that... we the people of world has missed out on some great music because of some stupid studio promotor

thank you for the information i need to do some schooling

Great round-up! Used to have all the vinyl back in the day (80s) & I'm with you on the guilty pleasure trip, that's the non-puritan stance. Have to say that ultimately, I enjoyed the fake band more re:The Inner Mystique & as a DJ, it used to be a favourite warm up!

Likewise, I also came to love the Axelrod Prunes stuff more! Sacrilegious or what?!

Been restocking my lost vinyl & reliving some great psych-outs... or should I say Flashbacks?!

Cheers for these & many more top drops!

Would love if you could repost! Thank you!