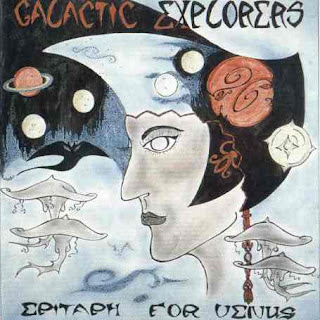 The Galactic Explorers were a group of three German synthesizer players, and to my knowledge this is their only album. It recalls the colder side of early Tangerine Dream for the most part, but manages to get a few melodic licks in between the lines and features a masterful command of alien atmosphere.

There are three tracks here, with the side long and aptly titled "Lunarscape" coming first. We start with one of those awesome analog sequences before falling into a swirling abyss of synthesized sound. The feel of the track is very similar to Ohr Records-era Tangerine Dream, although I'd venture to say that this stuff is a touch more accessible as the Explorers give a little more attention to melody than TD did on a disc like Zeit. "Ethereal Jazz" perhaps gets it's title due to some light free jazz style percussion. More notable, however, is the bubbling wall of synths that we find ourselves enraptured by while listening. "Venus Rising" is the shortest track, although still coming in at a robust eight minutes. Any sense of melody is thrown out the window as the group works with a series of atmospheric drones. It could practically fit seamlessly on the aforementioned Tangerine Dream albums.

For those seeking out the colder, electronic driven side of the krautrock explosion, you'll find that Epitaph For Venus is a lost treasure. For 1972 it is quite innovative and simply is the kind of music that no one really makes anymore, even though the influences are apparent in many modern styles. As a little side note, I find that the mastering (or lack of) makes the album sound a touch murky. Since this is a pretty minimalistic affair, I'd recommend tossing the tracks into a program like Sound Forge if you can and tweeking the levels a little bit.
Posted by Dr. Schluss at 12:07 AM

Thanks for this! I'm saving it for my next forest bike ride where I stop and smoke the herb high in the woody hills overlooking the water and the dusky blue gradiated silhouette of the mountains on the islands.

thanks for that unimportant description of your future activies. any more?

Man, this is beautiful progressive electronic. What happened to musicians later?

Funnily enough, pulled a copy of this out of some crates that had been undisturbed for a good few years.
Remember buying it in the mid-90's from Rhythm Records, at the time a fine record shop in Camden.
Wish I could find out more about the guys that made it. The album is a fine example of germanic electronics, must've blown a few minds when it first came out :)
The nearest modern analogues I can think of would be Unexplained Transmissions/Fuxa/Randall Nieman and to a lesser extent Sonic Boom/E.A.R
Nice review!

i wish they made reissues! damn i'm in love with this kind of music! like the cosmic jokers ash ra tempel, klaus schulze, steve hillage.... nice!! i want a copy! :(

Great stuff! Love early krautrock or rather kosmiche musick. It has gone but is still here: