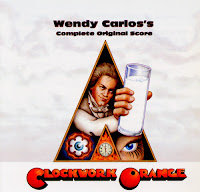 Even before Carlos knew of a film project concerning A Clockwork Orange, the composer had begun work on a composition (Timesteps) based on the book. It's the best piece of music in the score (and one of the most famed in the early history of electronic music), fitting in well next to late-'60s minimalist works by Terry Riley as well as the emerging Tangerine Dream (pre-Phaedra). Carlos also pioneered the effect of synthesized vocals (known as a vocoder), and their eerie nature perfectly complemented scenes from the film.

Much of the rest of A Clockwork Orange is filled with rather cloying synthesizer versions of familiar classical pieces (from Beethoven's Ninth Symphony, Purcell's Music for the Funeral of Queen Mary, Rossini's The Thieving Magpie) similar to Carlos' previous Switched-On Bach recordings. Still, it's worthwhile if only for Timesteps. A Clockwork Orange was originally released as a Warner Bros. soundtrack, containing only film cuts (which edited Timesteps down from 13 minutes to only four). Though Carlos released another version with more music, that issue was superseded in 1998 by the release of A Clockwork Orange: Complete Original Score by East Side Digital in the label's comprehensive reissue program.
Posted by The Bomber at 11:27 AM

Have you guys heard Kasio Kristmas? These freak-a-zoids only used cheap Casios to produce a freaky landscape of Holiday weirdness.

here is a link
www.kasiokristmas.com