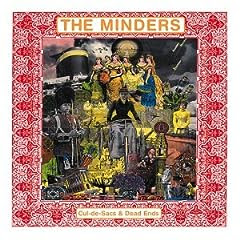 The Minders were (are?) one of the lesser-known tributaries of the neo-psychedelic hurricane of the Elephant 6 collective. This compilation of singles appeared at the collective late 90's peak (at least in terms of productivity). Frontman Martyn Leaper has a pretty strong way with a melody, and the songs press their way straight through the somewhat low-fi production to present us with tunes that could of found their way to the 1967 hit list. This is not necessarily to say that we're talking about a classic. There are a few dated late-90's indie rock cliches running rampant, especially is the vocal timbres, and Leaper put a little too much sugar into the sonic mix. I'm of the opinion that even the sunniest sunshine pop or psychedelia needs an undercurrent of darkness which we don't really hear on this. I guess this is where the disc shows its true colors as a singles compilation, as we don't get any balancing album tracks.

As sugary neo-psych singles go, however, Cul-De-Sacs and Dead Ends is quite a bounty. The songs are of a pretty consistent quality, so your favorites will probably be the ones that forever get stuck in your head. For me "Almost Arms," "Better Things," "Now I Can Smile," and "Waterlooville" just won't leave my brain playlist. Maybe this disc is a little dangerous after all.

I have to admit that I was a bigger fan of this disc when I was rollocking around the University of Georgia nine years ago. Now, this album is much like a bag of Twizzlers for me. I enjoy them and can't stop eating them when they're in my hand, but I end up with a stomachache later. This album too will give you a stomachache, especially if you eat it.