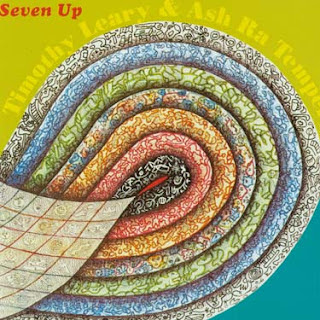 Sometimes I get the impression that I may be a little dense. Schwingungen is considered a masterpiece, but I just don't see it. Meanwhile, this one is seen as a misstep in an otherwise stellar run of albums. The catch is that I love this one and pretty much see this as Ash Ra Tempel's shining moment as a proper band (I'd still give the top slot to Inventions For Electric Guitar, which is a Manuel Gottsching solo album in all but name). With the revolving door in full swing, we get new drummers and guests appearing here, most notably LSD guru Timothy Leary. He provides vocals for the album. He can't really sing, but he does sound focused, yet demented, which I think perfectly matches the music.

The first side of the album is listed as "Space," which is probably a fitting name for any track this band produced. Leary merrily belts out what I would classify as bubblegum blues as the band blasts at full tilt on sections like "Downtown" and "Right Hand Lover." Now this alone would rate the music as an amusing novelty, but these sections are juxtaposed with full-tilt walls of intense psychedelic noise. It's like the band was hired at a party to play some groovy dancing tunes, but are so blasted away on acid (with Leary on board there's no alternative substance-wise) that they keep getting distracted and begin searching for the great cosmic sound of Om. Then they realize their error and return to the bubblegum blues before gleefully losing focus again. It's this disorienting loss of focus that makes "Space" one of my favorite tracks period. Just picture these freaks playing this stuff at a bewildered high school dance and maybe you'll dig it.

Side two's "Time" is more Ash Ra Tempel by-the-numbers if such a thing is possible. It's a very chill ambient that lightly recycles themes from the last album and bears a bit of resemblance to Tangerine Dream's Alpha Centauri. This makes sense as Steve Schroyder played organ on both recordings. Leary has a very different role with some strange spoken word vocals often over some beautiful wordless female singing. We don't hear quite so much of Gottsching's guitar on "Time" as is typical, but Ash Ra Tempel was still a proper band at this point, so it's ok. Realistically, "Time" is probably superior musically, but I just can't get over the rush of "Space." But as Einstein theorized, space and time belong together.

So I'm going to put this album forth for some serious reassessment. This is about as psychedelic as rock music gets. You really don't need the help of any substances for this one to utterly and completely blow your mind. It doesn't hurt that the cover art is completely dang awesome either. Give it at least two listens.

Worth listening to for a bit of Tim's meandering!

I think this is the best Ash Ra Tempel disc out there....

that's the first ash ra tempel record i listened back in late 80's since then i've listened their discography extensively (luckily w/ all the early 90's cd reissues on spalax, etc) however i am hooked on this one must be the atmosphere of it that drives me nuts with it each time i listen to it or not sure what.
anyway, great blog keep it up!
nicolas

Are you positive that's Leary singing on Space? It sounds more like Manuel to me, then Leary saying random things on Time. I imaging Leary provided the acid and the grounds for the experiment but I would have liked to hear him on synth

Tugging link, turn it up! please

Thank you for all the wonderful music reviews. Checking your blog almost daily in 2020!