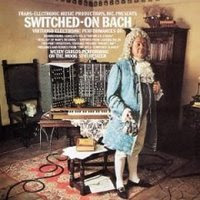 This late 1968 release seemed innocent enough at the time; and actually, it was a sincere effort to use a then newly-practical interpretive instrument, the Moog synthesizer, in a decidedly traditional musical manner.

Indeed, at the time, it was simply extending -- in a somewhat more forward-thinking direction -- the kind of attention that had been devoted to Johann Sebastian Bach's music as early as 1782, barely over 30 years after the composer's death, when Mozart wrote a set of string trio arrangements of some of Bach's keyboard works. Heard 40 years on, the approach here seems very tame and formal, but in 1968 it offended some Baroque purists (of whom there were relatively few) and a lot of classical music Luddites (of whom there were a lot more); but it still became the first classical music LP ever to be certified for a Platinum Record Award, by selling to hundreds of thousands of mostly younger listeners who didn't normally buy classical recordings.

Wendy Carlos had come up with an artistically valid and musically legitimate approach to the most tradition-bound of all classical music that made it not only palatable but exciting to a generation of listeners more inclined toward the Beatles than Beethoven (much less Bach). Carlos' use of the Moog's oscillations, squeaks, drones, chirps, and other sounds was highly musical in ways that ordinary listeners could appreciate, itself a first in the use of this instrument, and was characterized by -- for the time -- amazing sensitivity and finely wrought nuances, in timbre, tone, and expressiveness. Carlos saw the Moog voice as valid on its own terms, which may be one reason why this album still stands out today, when compared with some of the more flamboyant work that followed from others, such as Isao Tomita -- everything here is musical, with no sound effects to speak of until near the finale (and even that is restrained); and the Moog is working in its own "voice," rather than overtly imitating other, non-electronic instruments.

On the downside of the ledger in the eyes of many serious listeners, this record and its success were also to "blame" for any number of excesses by Emerson, Lake & Palmer, Rick Wakeman (especially The Six Wives of Henry VIII which, to be fair, was his best album), Tomita and others, and helped foster the multi-keyboard musical barrages mounted by ELP and Yes, for starters. [Switched-On Bach has been reissued several times on CD, including an audiophile version and, in 2001, an edition with one bonus track.] -allmusic-
Posted by The Bomber at 11:19 AM

"On the downside of the ledger in the eyes of many serious listeners, this record and its success were also to "blame" for any number of excesses by Emerson, Lake & Palmer, Rick Wakeman (especially The Six Wives of Henry VIII which, to be fair, was his best album), Tomita and others, and helped foster the multi-keyboard musical barrages mounted by ELP and Yes, for starters."

ELP and Wakeman are pure upside.

well this is the All Music Guide you're talking to. :p

also, neato, I've been looking for this for quite a bit

I wish I still had it, but I had Switched On Bach done by Walter Carlos. Perhaps a sex change occured after the initial release? Also the cover was the same except for "Bach" being seated.

The sex change was already in progress during the release. All Walter Carlos releases are now credited with Wendy.