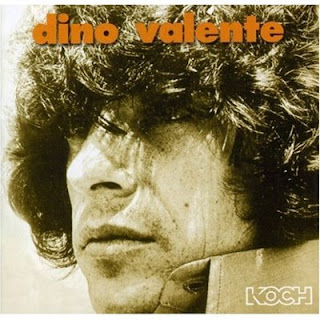 Dino Valente rates as San Fraciscan, Summer of Love royalty. Among his flower child qualifications are his contribution of the song "Get Together" as part of the hippy lexicon, as well as his involvement founding the Quicksilver Messenger Service. Of course, due to a drug bust he didn't actually record with that band until it was arguably past its prime. This solo album dates from shortly after his release from prison. It's basically psychedelically folksy shambles, but it's far more coherent then the truly unhinged solo releases of Skip Spence or Syd Barrett, of which this album compares to (sort of).

If there's a problem here, it's the lack of diversity. Valente's voice isn't bad, but he seems pretty incapable of any kind of range or modulation. He does sound fully involved though, so we'll give him a past. Most of the tracks are ornamented simply with a reverb-laced acoustic guitar and a bit of spare instrumentation that's also been blasted through an echo chamber. When we finally get some orchestration on "My Friend," it's like a light shining through the clouds and manages to creep into Tim Buckley territory. Other highlights here are the sprawling, epic "Children of the Sun," and the opening track, "Time." "Me and My Uncle" is an enjoyable rendition of that grammatically incorrect standard. I also have an affinity for the strange and experimental "Test," although it's pretty atypical for the album.

This is a decent release with some solid songwriting. The sound here exists in a pretty thin range. If that range happens to push the right buttons, you may rate this as a buried classic. The rest of us will likely get one or three spins out of this before heading out for new sonic horizons.

Anyone responsible for "but it's far more coherent then the truly unhinged solo releases of Skip Spence or Syd Barrett, of which this album compares to (sort of)." has no business crticising the grammar of others!

Thanks for the U/L, though!

Anyone interested in the story of how Valente (as a cocaine addicted, gun obsessed egocentric person) destroyed the brillant 4 man Quicksilver Messenger Band incarnation should read "Summer of Love" by Joel Selvin. Strongly recommended!

what the hell are you talking about, mike-floyd?

Valente - how talented he may have been as a songwriter – surely wasn't the easiest guy to get along with...

In my opinion QMS were far better of and a much better band, BEFORE Valente tried to take the band over (though I still like the ' Just for Love' and the 'What about me' albums a lot...)

this is beautiful, thank you!

it's funny how many people say that QMS were ruined by DV and end up liking the later albums when they finally hear them-it's a charge that was levelled in the early 70's and people haven't been able to let go since then.this album ain't up any longer sadly.

Ego Valente did ruin the best San Francisco Psychedelic Rock Band, turning it from the extraordinary into something insipid and ordinary. Gary Duncan was a very good, more than competent player as were the rest of the band -but it was the incredibly charismatic, brilliant John Cipollina the finest and most original of the SF guitarists who made Quicksilver extraordinary -all ruined by ego. I witnessed it first hand -and was there at the Fillmore west for the Happy Trails Sessions along with many brilliant Family Dog shows over at the Avalon. Its tragic -what could have been if they had dumped this loser.