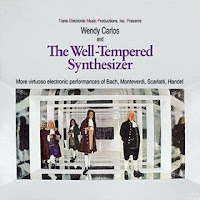 Pressed for a sequel to Switched-On Bach, the unexpectedly hot-selling breakthrough album for the synthesizer, Wendy Carlos temporarily shelved plans to move out of the 18th century and instead came up with an album that is, in some ways, even better than its famous predecessor. Her instrument rack had grown larger and more flexible and her technical abilities even sharper in the year since SOB came out -- and the improvements are audible in the thicker harmonies and more sophisticated timbres, all without losing the zest and experimental zeal of the earlier record.

Here, she revisits J.S. Bach and imaginatively translates the music of Monteverdi, Handel, and especially Domenico Scarlatti into the electronic medium. Excerpts from Monteverdi's "Orfeo" and "1610 Vespers" serve as the gateway and closing benediction, respectively, to this collection, and four Scarlatti keyboard sonatas are given dazzling treatments (the sonata in G became well-known in the '90s on a Christmas TV commercial).

There is a mini-suite from Handel's "Water Music" at the center of the album, and the densely orchestrated yet still dancing treatment of Bach's "Brandenburg Concerto No. 4" serves as a signpost as to how far Carlos had come in only a year.
Posted by The Bomber at 11:24 AM

Thank you for Posting
You are Awesome!

The file is gone from Rapidshare. Any chance for a re-up? Thanks

I actually didn't post this. I think the album might be lurking around somewhere on my external hard drive, but if someone's got an easy link, let me know. While this is a great album, 'Sonic Seasonings' is the Carlos album that gets my ear most of the time (and 'Land of the Midnight Sun,' but that's just because it's tacked on to the end of the 'Sonic Seasonings' CD).