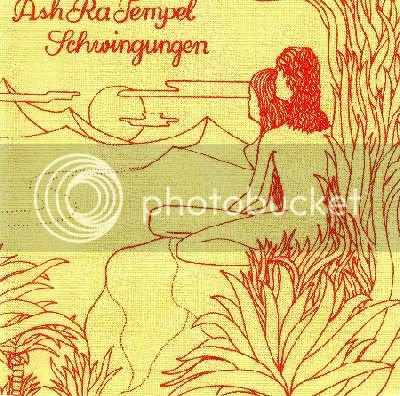 Schwingungen is often cited as Ash Ra Tempel's magnum opus, but I have to admit that it's never really clicked with me. The band remains very experimental, but the have lost the unhinged, going for broke dynamic that makes their debut so appealing to me. One issue might be that Klaus Schultze's drum stool have been filled by Wolfgang Muller. Mr. Muller's certainly not a bad drummer, but he doesn't gel quite as well with Manuel Gottsching's guitar playing. Maybe it's just a function of not having played together for long. Despite my reservations, there are some fine sounds to be heard here.

The opening track, however, is by far my least favorite track on any of the early Ash Ra Tempel albums. It's a vocal track called "Light: Look At Your Sun." Vocalist John L.'s warbling quickly gets my hand on the needle to switch to the next track (ok, it's the mp3 player button; I only wish I had some Ash Ra Tempel on vinyl), and the band has blunted their experimental edge by incorporating TOO much song structure and an unwelcome emphasis on blues riffs. I have no problem with blues or song structure, I just prefer these guys without a net. "Darkness: Flowers Much Die" is a huge improvement and by far the best song on the album. The beat builds up over twelve minutes with a metronomic tribal pulse eventually augmented by a wall of bongos. John L. doesn't bother with lyrics on this one, and effectively improvises strange sounds and made up words that would give Can's Damo Suzuki a run for his money. The only other track here is the 20 minute long "Suche and Liebe," which I'm ambivalent about. After a long stretch of vibrophonic ambient sound, the band finally kicks into gear only to sound like contemporary Pink Floyd. Considering the innovative and experimental charge the band manges on the debut and on later albums, sounding like Pink Floyd is a major disappointment. On the positive side, they ape that superstar band pretty well, possibly even bettering that basic template.

This is a revered album by many, and I think I'm in the minority seeing this as a step down. I just want to hear something wild when I put on Ash Ra Tempel, and I feel that Schwingungen is too restrained and mannered, not playing to the band's strengths. Even so, it's a solid piece of work by a phenomenal band and the second track is a highlight in the band's discography.

A lot of Thanks and greetz

You're right! Actually I don't like this one because of horrible vocals and too much blues and schemes instead of space and novelty. Self-titled debut album ROCKS!

I've taken so much from your blog, I feel I need to give back. I know you like spacey sitar, so here's a link to an album I posted at one of my blogs, it's Peter Walkers - Second Poem To Karmela. I think you'll dig it.
http://mutantfamilyvalues.blogspot.com/2010/02/peter-walker-second-poem-to-karmela-or.html

[...] Göttsching’s performance and recording experience with Ash Ra Tempel – as well as his contributions to projects [...]