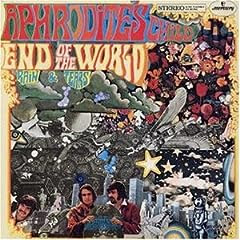 Aphrodite's Child was a Greek band featuring several future musical luminaries. New age/electronica guru Vangelis (of "Blade Runner" fame) shows up here as a multi-instrumentalist and writes the bulk of the music. Demis Roussos, who apparently had a successful solo career in the 1970's is the lead vocalist. This album is their debut and feature some prime, if slightly-skewed, 1968 psychedelia.

You've perhaps heard "Rain And Tears," the closest thing to a hit on this album. It's a pleasant organ-led psych track in the "Whiter Shade Of Pale" mold. Fortunately, it's not the best song here as End Of The World turns out to be a very consistent album.

I've often heard the early "prog rock" tag thrown at this direction. Although there are a couple of slightly longer tracks (like six minutes) present, the modus operandi here is very much psychedelic pop. We're not looking at multi-part, constantly shifting songs here. I think the progressive elements apply more to the oddball elements of this band.

As Greek musicians (who also spent time in Paris), these guys were probably pretty disconnected from the British/American mainline of 60's pop. Demis Roussos seems like he's often horsely belting out the vocals without any restraint in a strange approximation of his counterparts. This often works to enjoyable effect as "Mister Thomas" comes of as much less twee as it would otherwise, and I always get an amusing image of Mr. Roussos blasting from the top of a windswept mountain on the sideways rocking "Don't Try To Catch A River."

This is also an early example of an almost guitar-less rock album, which would become a common progressive rock gimmick. Vangelis is quite a keyboard player, however, and I never found myself missing guitar tones. It fact, I really had to pay close attention to the album to notice the lack of guitars. As a warning to fans of Vangelis, the songs here little in common with his solo works, although you might be pleasantly surprised by his different, but great performance here.

Lyrically, this album gets a bit strange, perhaps due to the fact that English was not these guys first language. Things are pretty creepy on opening track "End Of The World" as Roussos suggests "You should come with me to the end of the world without telling your parents or your friends," and that he'll "give you anything that lives on earth." It's not an enticing offer from a hairy hippy. As the album continues, we hear plenty of other psychedelic cliches twisted into surreal shapes.

The longer tracks, "The Grass Is Not Green" and "Day Of The Fool," break from the basic psychedelic pop mold. Here Aphrodite's Child get a little more progressive, but it's much closer to Days Of Future Passed Moody Blues than "Karn Evil 9." They do manage to end the album on a very creepy, unsettling note filled with decaying organs and sputtering percussion with "Day Of The Fool." End of the World, indeed.

Buy Me:
Aphrodite's Child- End Of The World
Posted by Dr. Schluss at 11:14 AM

This sounds really cool, I'm downloading now. Thanks for your awesome blog, definitely my favorite music blog at the moment!

please repost.
thanx for your blog. I really enjoy the music

No artwork is bullshit!

One of my favourites!!!I like this band from "End of the World" to 666 (a Masterpiece).Amazing blog you have!!!