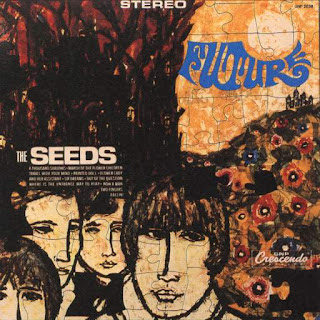 First off, I think that I have to admit that this album is a bit of a guilty pleasure for me. The Seeds, while a very distinctive band, did not possess the talent of the best, or even above average artists of 60's rock. On their psychedelic opus, Future, we hear the sound of a band that has a huge recording budget, but no clue what they're doing. Fortunately, what they ended up creating is a wild 60's pop art display, which contains little nuance, but tons of charm. Future is the sonic equivalent of a 60's cult film like The Trip.

The Seeds began life a few years prior to this recording as a prime garage/psych band out of LA. They'd already scored a few minor hits with "Pushin' Too Hard" and "Can't Seem To Make You Mine." They cashed in on their newfound clout to create this weird and freaky distorted mirror image of Sgt. Pepper's. The strange thing is, Future is arguably a more fun album than that Beatles classic.

Let's hit the bad points first. Sky Saxon was a notably crazed singer, but he didn't really have the focused punch of somewhat like the 13th Floor Elevator's Rocky Erickson. Without the sonic adornments on this album, his singing easily becomes tiresome after a few tracks.

The Seeds compositional skills were also far from enviable. The songwriting usually doesn't stand out much here, and when it does it's practically a rewrite as on the "Pushin' Too Hard" clone "The Flower Lady And Her Assistant."

What raises this album to classic status for me is in the execution. "The Flower Lady And Her Assistant" is a far from original composition, but the disorienting harps and strangely meandering clarinet takes song into a brand new realm. Something like "March Of The Flower Children" becomes a great song because it ends up pointlessly and manically orchestrated with blaring horns and a tuba replacing what would normally be the bass line. The album continues with other random kitchen sink productions culminating in the epic length and wildly strange "Fallin'."

Film director Ed Wood is often cited as the worst film director of all time, but I disagree with this sentiment. Although his technique is painfully inept, his love and joy of filmmaking shows through in something like Glen Or Glenda and makes his films incredibly entertaining. I think the same thing applies her. The Seeds sound like they're trying to convey what they believe is an important message and create high art, and they're having a blast doing it. It doesn't matter that they really didn't have the talent to create another Sgt. Peppers because they're having so much fun trying. Fortunately, they also had a lot of money to make this quixotic attempt, and that just makes Future all the more charming.

This is far from a masterpiece of psychedelia. It is, however, a lot more fun and entertaining that many of those classics. Future gives "guilty pleasure" a good name and inhabits a special goofy place in the pantheon of 60's rock.

Note: The buy me link below includes A Spoonful Of Seedy Blues on a two-fer. I find that album much more dull and ill-fitting with Future, but it is the best place to get Future on CD.

Buy Me:
The Seeds- The Future/A Spoonful Of Seedy Blues

Dziękuję za Seeds, mniam :)
Thank You for The Seeds :)

Thanks for the link "anonymous"! Cheers !

Future is brilliant, but I do not think they had that big of a budget.

Yeah, not so much bigger budget as total lack of supervision - hey, they had hits, they were a hot live act, they'd made two albums with minimal help...

thanks for the mono post! Stylistically, "Chocolate River," and "The Wind Blows Her Hair," fit on this LP and sound as if they were recorded at the same time. Include those 2, and this classic platter would rate as 5 stars! thanks again

Thanks for the mono. Always thought Flower Lady And Her Assistant was the creepiest. Maybe more a Mr. Farmer clone, though.