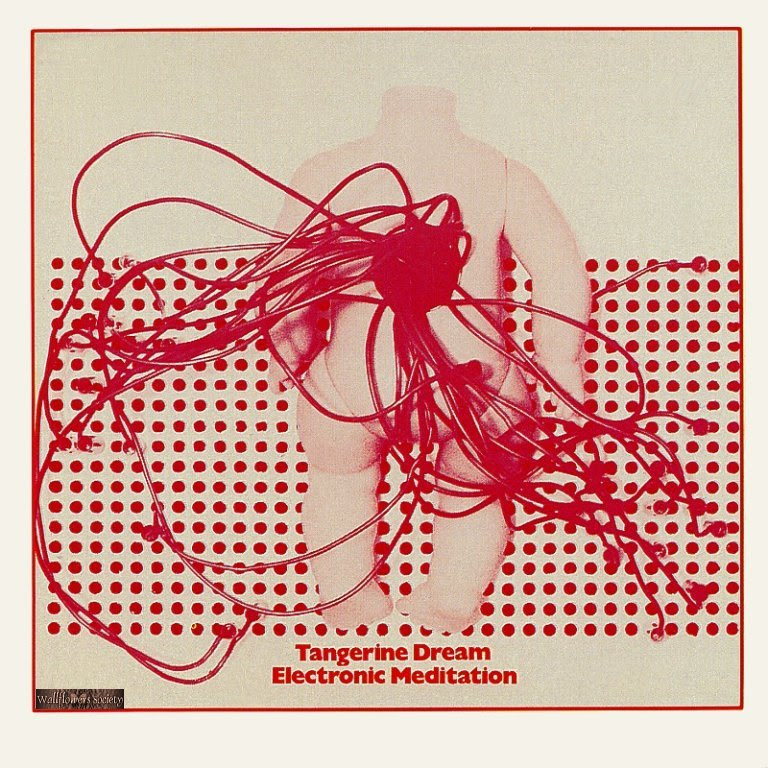 The long and convoluted story of Tangerine Dream 70+album recorded output begins on this unfortunately disappointing disc. It's a shame as the personel present garners very high expectations. Of course mainstay Edgar Froese is here wailing away in his early psychedelic guitar mode. Soon-to-be electronic guru Klaus Schulze appears as the drummer and Ash Ra Tempel's Conrad Schnitzler complete this first version of the band. Even before the release of Electronic Meditation Tangerine Dream would fracture and only Edgar Froese made it to album #2.

The problem here is that Electronic Meditation is not a properly thought out or conceived album. There is some gobblygook about a "cycle of life" concept glueing the album together, but the fact is that this was basically a recorded rehearsal. None of the members ever thought of this as their first album. The tapes found their way to the brand new Ohr label, who wanted to put the recordings out as one of their first releases. Finding themselves in need of income, the Dream consented to this.

The cover art and title are extremely misleading. We see a heavily wired modular synth looking thing tied to a doll. Especially considering Tangerine Dream's (and Schulze's) later role as electronic pioneers it seems safe to expect that this is an album focused around electronic sounds. For better or for worse, this is really a very psychedelic guitar/bass/drums album with a touch of flute and just a few synthesized sounds basically functioning as sound effects.

Still, there are of course plenty of great albums with traditional instruments. The bigger problem is that there are no melodies here to speak of or any sort of forward motion. The band doesn't seem to have any purpose or goal. They're basically screwing around. In fact the only thing resembling a theme shows up in the only standout, "Journey Through A Burning Brain." Even here though, the theme explicitly recalls Pink Floyd's "Saucerful Of Secrets" and the revised version of Tangerine Dream would create a far superior track like this on their next album.

I teach English to Japanese students, and in my discussion class last week we tried to define the line between noise and music. I have a wide definition and would still classify this as music. One student thought that if the music is played by professionals, it is music, even if it is very avant-garde. So, that too would classify this as music. Other qualifiers included having a theme and/or concept. For the most part this album is lacking those (except for what seems to be a tacked on concept), and about half of my class probably would not call Electronic Meditation music.

I'm not here to slam Tangerine Dream. The 70's Dream in particular were certaintly one of the most ground breaking bands around, and second only to maybe Kraftwerk in terms of electronic music. But I highly recommend starting with the second album. Give this one a try if you're a completist and are already familiar with Tangerine Dream's later masterworks.

Buy Me:
Tangerine Dream- Nebulous Dawn (includes this album along with three far better ones)
Posted by Dr. Schluss at 10:54 AM

Well, this is a fucking great album, with a fuckin' great sleeve design.

Dear Dr. Schluss: You forgot to put the web adress. I am a completist and wish to hear to this album's music.

i love your blog, but i think you're totally off base here. this is probably my second favorite TD, after Phaedra.