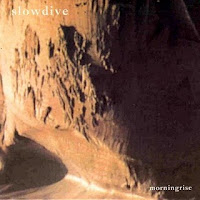 Wow! Slowdive takes an amazing leap forward on their second EP Morningrise. Both the songwriting and production are now very much up to speed and I feel matches any of their shoegazing contemporaries.

The guitars now reach out for ethereal space, creating a gauze that envelops your brain. Slowdive's rhythm section functions almost like electronic music, eschewing any flashy display to provide a steady pulse and ground the songs as much as possible. The vocals are heavily echoed and doused with reverb, valiently trying to link the more interstellar guitar sounds with the backbone bass and drums. At the end of "She Calls," the vocals finally give up, and lift the song to a new plateau.

If there's any fault here, Morningrise (in retrospect) seems almost like a dry run for the band's next single. The title track and "She Calls" both include aural and lyrical suggestions of the next EP's lead-off track, "Catch The Breeze." While both awesome songs, they fall a little short of one of Slowdive's signature songs. The almost ambient "Losing Today" delves into some darker territory that Slowdive would explore in greater detail on later releases.

Still, Morningrise delivers the goods. While the first EP did include a few telltale signs, Morningrise is the sound of a band entering the top of the game.

We'll just ignore the fact that the title conjures up some dirty images (well, it does for me dammit!).

Yr. welcome! Glad to see someone biting on the Slowdive bait.

Of course, man!
Did you think people wouldn't have interest in these Eps?
ahaha