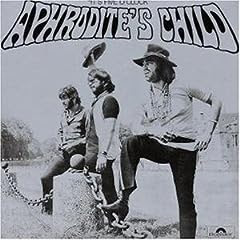 Aphrodite's Child made a serious change of gears on their second long player, It's Five O' Clock. Whereas on their first disc they were firmly a strange psych-pop band, they try to adopt a more country-rock sort of vibe here with just a few hints of psychedelia. That's right, a Greek band playing country rock.

They really don't do a bad job of it at all. Unfortunately, the eccentricities that made the first album so interesting are mostly smoothed over here and the overall sound is much more bland and less distinctive. In fact, I had trouble believing thart this was the same band until the fourth track, "Annabella," where Roussos finally returns to his amusingly overly dramatic vocals. Some of the songs, while well written, don't really take off until the band gets onto more of a freaky jam mood as in the second half of "Let Me Love, Let Me Live."

Aphrodite's Child still maintains interest as a truly organ driven band on many of the tracks, but there are far more guitars present here. I guess you can't really do country rock like "Wake Up," "Take Your Time," "Marie Jolly," "Or Such A Funny Night" without some strummed acoustic guitars. For better or for worse, none of these tracks are embarrassing, but they do come off as uninspired. These are very much utilitarian compositions.

The band tries to reach out in a few different directions on "Funky Marie" and "Good Time So Fine." "Funky Marie" is certainly not funky in the traditional sense, but it is odd with its manic percussion including jazzy vibes and spastically hit bongos. Unfortunately, it's not very good either and is more of a overly stoned jam than anything else. The band fairs a little better trying to create a touch of dixieland on "Good Time So Fine" and mixing it with, uh, hoarse yelping. Still, I'd take, well anything from the first album over this.

The title track, which is also the opener, is sort of a rehash of "Rain And Tears" from the last album. It's not bad, but it does suffer from the law of diminishing returns. If I want to hear something like this I'd sooner put on "Rain And Tears."

The lyrics are far less noticable on It's Five O' Clock. I guess the singing is integrated in the mix a little more, but I didn't pick up on any of the demented psychedelic cliches which I enjoyed so much on the first album.

It's Five O' Clock is a pretty average album. There are a few successful country rock numbers which are worth a listen, but the experimentation often flies off the rails, and the album unfortunately pales in comparison with it's far more distinctive predecessor.

Apparently, Aphrodite's Child took a deep plunge into the weird on the next album, 666. I haven't been able to track that one down, but if someone out there can send some mp3s my way, I'd love to review it.

Thanks for the link!

I'll probably review this one at some point, but I have yet to really get my head around it.