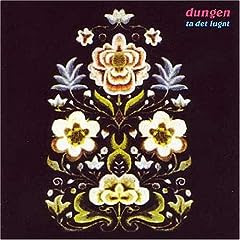 Dungen is a Swedish band which is more of less a monkier for multi-instrumentalist Gustav Ejstes. Unlike many of the bands you read about on this site, Dungen is fully functioning in the present and in fact has a new album coming out in the next month. I don't think they quite fit the "obscure" tag, but I certainly wouldn't consider these folks mainstream either.

Ejstes whips up a heady acid rock groove on Ta Dent Lugnt, Dungen's third album. The band's sound is set pretty squarely in 1968, with the most obvious reference point being late-period Cream, albeit being sung in Swedish. There are lots of searing acid rock guitar leads, and the impressing drumming falls somewhere between Ginger Baker and Mitch Mitchell's brands of manic, swinging thumping. In fact, the only thing here that recalls the last 35 years of music is that Ejstes voice makes me think of the Red Hot Chili Peppers' Anthony Kedis.

Yes, the lyrics here are entirely in Swedish, so this is not a good place to search for tripped out psyche poetry, unless you're fluent in Swedish. A band like Dungen is very much about it's sound, and Ejstes' voice, while not phenomenal, is certainly expressive enough that I get an idea of the meaning.

For better or for worse, Ta Dent Lugnt is frontloaded with its standout tracks. The album starts out in a poppier mode with the one-two-three punch of "Panda," "Gjort Bort Sig," and "Festival." "Panda's" drum intro is especially of note and "Gjort Bort Sig" has an awesome vocal echo effect adorning it's chorus. Apparently, Dungen live is more a balls-out jamming affair, and the next few songs, "Du E For Fin For Mig" and the title track, have more sprawling lengths. The former is textured with some string overdubs while the latter pounds it's central riff for several minutes until morphing into, uh, jazz.

The rest of the album doesn't have as obvious highlights (except for the closing, anthemic "Sluta Folja Efter") but the flow of the album follows this lead into jazz. There are a few song fragments and several jazzy instrumentals, the best of which is the Soft Machine-like "Om Du Vore En Vakthund." Breaking this up a bit is the very Beatlesque "Lipsill," and the sludgy loud "Bortglomd." This later part of the album recalls the flow of Olivia Tremor Control albums, although without all the tape splices.

Dungen's music basically amounts to a pristine recreation of psychedelia circa 1968 on Ta Dent Lugnt. They do a phenomenal job at this, however, and deserve a listen by any fans of acid rock.