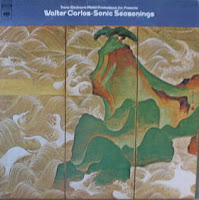 The same year Carlos finalized the score for A Clockwork Orange, the composer recorded a double album named Sonic Seasonings; it was a complete turn away from the majestic synthesizer soundscapes and classical inspirations that had marked the movie score. Instead, Carlos recorded large amounts of environmental passages to produce a work that cycled through the four seasons. Beginning with bird calls and a thunderstorm to mark "Spring," Carlos phrases the synthesizers only in terms of the nature sounds heard. They rarely interject themselves, and the result is closer to a nature recording with occasional effects than a synthesizer recording with nature sounds. Of course, there was no precedent for "nature," "environmental," or even "new age" music in 1972 -- Sonic Seasonings was basically the genesis for several entire genres of music two decades later. As part of East Side Digital's Carlos CD reissue campaign, Sonic Seasonings was issued as a two-disc set, including the original LP plus a second disc of "natural" recordings, originally begun in 1986 and known as Land of the Midnight Sun.

Dr. Schluss' ratings:
Quality: 5 out of 5
Trip-O-Meter: 5 out of 5
(I should probably mention that this album happens to be one of my all time favorites; thanks Pablo!)
Posted by The Bomber at 10:27 AM

amazing stuff !!!
btw thank you for your excellent blog.

what would be your others all time favs ?

Thanks for everything on your excellent blog, but in particular the recent Wendy Carlos stuff. I've been rebuilding much of my old vinyl collection thanks to you.

One of the first CDs I ever got in the 80s was his/her latest release at the time, Beauty In The Beast. Very beautiful stuff, influenced by Malian music in different tonal scales than the familiar old eight-step tempered scales of Western music. If you'd like to have a listen, I could upload it. Lemme know.

Side note: Sonic Seasonings was a real favorite of mine back in those lysergic days. I used to put it on my turntable at very slow speed, and let it play all afternoon. Doing this, I was able to achieve an amazing 11 or 12 out of 5 on my trip-o-meter!

I have always loved playing this really loud in the first waking hours of my days and trying to complete a simple task... never works. Then it work way better.

Glad someone has saved these albums. Great music.
Thanks

can you please reupload
links are dead
thanks a lot .... beautiful blog

Or you could use single link:

pass (for both links): sergingus

Only the original LP, though

Any chance of a re-up? Thii is nowhere on the net right now! Thanks!

Thanks friends! the last link still works!! Regards to the original uploader...