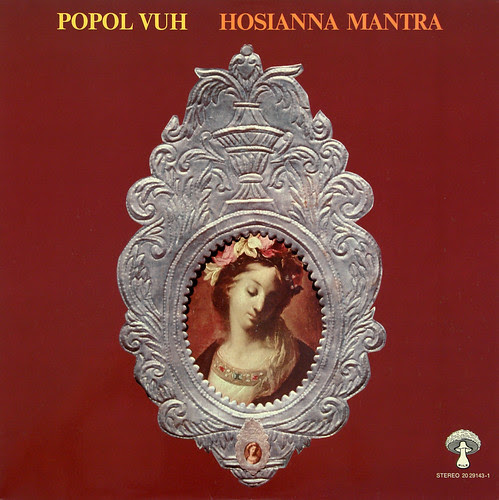 Now, I suppose that it may make me a little grinchy, but I really don't like 99% of the Christmas music that I come across. I usually find the melodies far too predictable and the typically 'warm' instrumentation annoying. Florian Fricke was not out to make Christmas music with the third Popol Vuh LP, Hosianna Mantra, but some of those Christmas characteristics do rear their ugly heads in the music presented here. Apparently, Fricke had decided to become a more hardcore follower of the Christian faith, and the concepts here very much reflect that. That's not really a problem (although it tends to be a bad omen, the prime example being Dylan's 'Christian' albums), but somehow his new-found faith also convinced him to chuck the Moog and focus primarily on more organic sounds. Here it manages to work pretty well, but as the 70's rolled on, I don't think Popol Vuh's music quite managed to create the otherworldly vibes the the first two albums (and the first side of this one) did. Basically we're looking at a pretty good transitional album with Hosianna Mantra; I just don't really like where the transition was going.

Side one is the keeper here, and best refelects what Julian Cope referred to as psychedelic music for a convalescent home. Fricke seems to be eternally rolling around on his piano on the Hosianna Mantra suite, and he's accompanied by plenty of horns, treated pianos, and other such accouterments. The big standouts, though, are the liquid, delayed guitars of Conny Veit, and the soaring vocals of Djong Yun which commence on the second track. The first side is a pretty major departure from the Popol Vuh sound that we heard on the earlier albums, but it is just as effective in creating a distinct sound world. I'm not so hep towards the second side. "Das V Buch Mose," which is arranged as a side-long suite, falls to what I feel is the Christmas music curse. Right at the start we get a flute part that sounds like it was ripped straight off of a Windham Hill Christmas sampler. Sure there's a sitar in the background for added effect, but that doesn't sate the odd feeling in my stomach. The short "Andacht" sections are pretty cool, but "Segung" provides Yun with a vocal line containing too much syrup (granted the instrumental here works relatively well), and "Nicht Hoch" comes across as a slightly psychedelicized "Silent Night."

There is a lot here worth your attention. For those of you with a ear for warm holiday sounds, you might even rate this as your favorite Popol Vuh album. But some of us psychonauts out there may wish that Fricke had not ejected the electronics and focused more on the otherworldly melodies that cropped up on the first two albums and even the title suite of this one.

Maybe not as trippy, but it's surely enjoyable as slow senual love marking... well, if you ask me. A beautiful album, and one I miss so (hard drive crash), so thank you! for revisit of this one. Fricke is a BIG influence on my own music.

There will be an album playback of 'Hosianna Mantra' by Popol Vuh in the beautiful atmosphere and acoustic of Shoreditch Church, London on 8th April. It is part of a series of events called 'A Celebration Of: Popol Vuh' to mark the 40th anniversary of the group's formation. More info here: http://acelebrationof.blogspot.com/