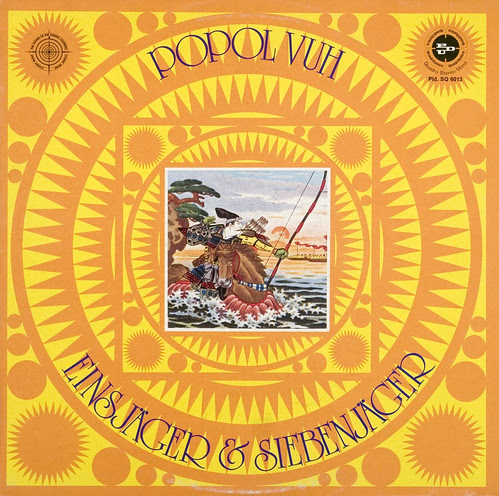 That title deserves a couple of umlauts, but I'm not quite smart enough to know how to get them in there. Anyway, the more important matter at hand is obviously this album, which is quite good, but very disappointing for those that drool over the band early interstellar sounds. At this point, Popol Vuh becomes a much more conventional rock band. Yes, they play well. Yes, new guitarist Daniel Fichelscher contributes some great space rock guitar parts. But I'll be damned if this doesn't sound like a band that would perform at a jam band tribute to Pink Floyd or something.

"Kleiner Kleiner" is a watered-down, but still potent suggestion of the band's mysterious tones, but "King Minos" is a better example of Popol Vuh's new M.O. There are touches of prog and the typical seventies rockin' sound that seem like an unfortunate retreat from the frontier that Fricke explored on albums past. Once you've explored the outer realms of sound, it's sort of a killjoy to return. The first side of the album does present a consistently high quality, and there are plenty of nice folk and space rock moments, but it comes across almost as generic for me. The side long title track seems like it could be a return to exploration, but it's really just several jam band-like sounds strewn about a 20 minute period with a couple of more ambient segues.

I've been throwing around the jam band term a lot here. There is far more of a sense of purpose and inspired instrumental command than you're likely to hear on a Phish or Widespread Panic disc, but this album still makes me think of those band while their earlier stuff (and most of the music I review on this site) does not. This isn't bad stuff, it just feels like serious underachieving from what should be a great band.

yeah i find this music more beautiful than psychedelic. thank you so much for sharing. it is quite beautiful, though.