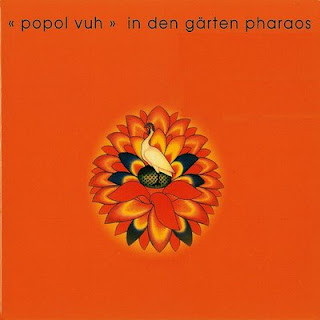 This is a close kin to the previous album, Affenstunde, but Florian Fricke and his small crew did a fine job innovating the sounds they pioneered on that 1970 release. This is widescreen mystical music, finding an awesome balance between the cold, deep space tones of Fricke's Moog and the the warm, primitive percussive sounds. I do not hesitate to call this one of the cornerstones of electronic music. It's not too hard to imagine modern sequencing and pro tool technology rendering this as IDM ('intelligent dance music' for those that may not know), but I prefer this one just the way it is.

The opening track communicates its imagery perfectly, and I always appreciate music that I can describe in non-musical terms. We stand on the shores of the celestial ocean (or Nile as the title seems to suggest) as the god-like entities slowly enter, scouting the land for possibilities and bringing in their royal processionals. Eventually the building block for human civilization are introduced, both figuratively and literally. Reaching into the future, all traces of man are erased, leaving us with only the sound of receding waters. The organ-like, sunburst sounds of "Vuh" follow as our tour of the great beyond. The sounds combine over 14 minutes, attempting to attain that cosmic OM sound (or maybe Vuh in this context). I'm not quite sure how to fit the organ and detuned Moog sounds coda into my tale, but it certainly sounds fine. The bonus tracks here are a great addition, although they definitely do not fit the tone of the album proper. Forming what may as well be considered an EP, "Kha-White Structures" is much more overtly psychedelic and trance-like. My imagery here typically involves the idea of creatures living inside of of your multicolored-DNA who want to teach you about reality (I should mention that I'm not completely making this up - this somewhat arguable idea comes from Graham Hancock's book Supernatural).

We have here music that demands creativity from the listener. That means that you need to give this a dedicated listen to really appreciate it. The imagery it suggests is the gold at the end of the psychedelic rainbow. I'm happy to give this one my highest recommendation.

Thank you! This is one of Popol Vuh's best albums!

Thanks for posting Popol Vuh! You should also post the soundtrack they made for Warner Herzog's Nosferatu; it's an excellent album.

Thanks for this! Love your blog, lots of gems.

Outstanding! Been offline for almost a year, and one of biggest bummers was losing all my PV .mp3's, esp this one. Blam! Found it! and on Dr. Schluss' page, which I am very pleased to see still exists.

Thank you doctor, just what the guru in me wanted!

Dr. Schluss,
thanks for turning me on to this record. it is incredible. keep reviewing!
best,
ben

this is about the best music can get. thank you for sharing. synth and percussion is all one needs.