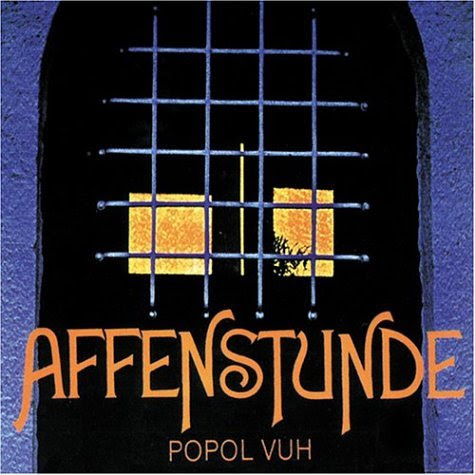 Popol Vuh is the name of the Mayan holy texts. It is also the name of one of the premier krautrock band, although the mystical implications of the former meaning shine through clearly on this record. Florian Fricke, the band's leader and visionary, seems to have been trying to reach for primitive sounds through cutting-edge technology at this point of his career. He was one of the first in Germany to use a Moog synthesizer, and those extra-terrestrial sounds are often juxtaposed with walls of percussion on this collection. It still manages to come across as sound ahead of its time.

The first side of the original LP is a suite entitled "Ich Mache Einen Speigel," which translates to "I make a mirror." I suppose the shimmering synthesizer sounds and clanging percussion would certainly support this idea, but I get a very different image in my head. I see our ancestors seeking shelter in a dark, damp, and forlorn cave many years past. They tentatively creep out as the spring arrives and begin their hunting anew. Then winter arrives with the third section of the suite. Following that 20 minute piece is the eighteen-and-a-half minute long title track. It's is very good, but much more in line with the sounds of contemporary Tangerine Dream. But the fact that Fricke already had a Moog at that time and Tangerine Dream did not gives this one distinct and impressive coloring. There's a nice bonus track also present on the recent rerelease which picks up the pace a bit with some chugging synthesized train percussion, and actually makes for a pretty nice addition even considering the flow of the album

I think I'm in the minority here, but I feel that Popol Vuh began at the peak of their powers and slowly de-evolved into less-interesting and more conventional krautrock (if there is such a thing) and 70's bloated psych-rock sounds. As such, I see Affenstunde as one of the band's magnum opuses (the next one also deserves that tag) as they tear open the curtains of time to reveal mystical and otherworldly sounds.

Thanks Doc, been looking for a listen to this one for a long long time! ...and I have to go get some, ummm err.. medicine *cough* to enjoy *cough* the ride.

I suppose I'm in the same minority as you. I completely agree with your assessment of the strength of Popol Vuh at the outset, which then diminished rapidly after In den Garten Pharaos.

I'm late to the blog, but have been getting ridiculous enjoyment out of going through the posts. Thanks!

just to let all you london fans know, there is an event going on called 'a celebration of popol vuh' marking the 40th anniversary of the group's formation, they are playing the albums 'Affenstunde' and 'In den garten pharoas' in a candlelit Church in Shoreditch, London. more info here: http://acelebrationof.blogspot.com/

mmmmm....okay have you heard "Letzte Tage, Letzte Nachte"? Or "Bruder des Schattens -- Sohnnes des Lichts"?? Maybe I just have some weird nostalgia for those albums but on the former Fichelscher's guitar/drumming is truly transcendent (without Djong Yun's annoying vocals (on most of the tracks anyway)), and on the latter -- the title track is just heaven; really.

But either way thanks for the awesome blog

What can I say? I agree totally with
you on the decline of POPOL VUUH. I actually bought "Affenstunde" and "Zeit" at the same time at West Germany's "Groovy" record stores in 1978 (shortly after that they went into bancruptcy). "Groovy" at that time had put out several samplers with
progressive tracks from several West German companies (like Schultze's brain label). What I miss in all those psychedelic blogs is the "psyche + prog" music done in the communist countries - like East Germany's "Amiga Label". I listened every Sunday during the 70's to "Berliner Rundfunk" with their "hitparade" which was 50% solid good progrock. In the U.S. we
only know "City" with "Am Fenster", a psychedelic masterpiece on par with BJH.
You don't know how much I appreciate your blog and take care.
fatheraxel