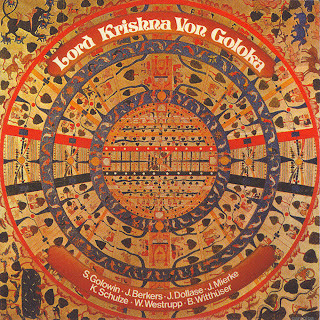 Sergius Golowin was a German acid guru who seemed to be sort of along the lines of a German Timothy Leary. He appeared on some of the "Die Kosmischen Kuriere" label recordings in a fashion similar to Leary's appearance on Ash Ra Tempel's Seven Up. In fact, that's a pretty good analogy for this album. The good news is that krautrock luminaries such as Klaus Schulze are front and center playing the music here, although it doesn't really rank up there with their best work. The tracks are gliding, almost ambient works on top of which Golowin waxes mystical in German. Since he doesn't really sing, understanding German will definitely increase your enjoyment of this album. Having gotten "C's" in my high school German classes, I'd be just as happy to hear an instrumental version of this instead.

We find three long tracks here. "Der Regen" is a more acoustically based soundstorm, with acoustic guitars and light percussion standing in for the rain, with some synthesizer glimmers coming in later. "Die Weisse Alm" is the shortest track here at six minutes. It's even more acoustically based and almost pastoral sounding, with Golowin coming almost close to singing. Unfortunately, he's not very good at it and I'd still prefer to hear this as an instumental. The best track here is the 20-minute closer, "Die Hoch Heit." It's also the best track here. Golowin's presence works a lot better as the atmospherics are far more wacked out than on the first two tracks. There are even a few moments where our Cosmic Jokers have an opportunity to work up a nice head of psychedelic steam (too bad guitarist Manuel Gottching isn't on this one to really tear things up). Just before the halfway part, the music downshifts into a nice space rock groove with some nice flute leads. Then Golowin starts whispering, which kind of annoys me.

This is not at all an entry point into krautrock. But once you've properly digested your early-Popol Vuh, Tangerine Dream, Cosmic Jokers and Ash Ra Tempel, and you're hungry for more, this isn't a bad place to get your teutonic fix. It's still has plenty of that weird early-70's krautrock cavernous sound that even the masters couldn't replicate by the latter half of the decade.

Speaking/understanding german I can assure you that it DOES NOT increase one's enjoyment of this album...

I would have preferred an instrumental version too...

Oh man, I love this record, everything about it. My rip has all kinds of digital distortion though...I'm hoping this one's clean! Downloading now...Thanks so much...Love your blog!

thanks for this, anyother sergius golowin you know of that are worth searching out?

I like your comments about the longer tracks. The musicians who played on this were sort of a "superstar" lineup of Krautrockers at the time. I don't really think Golowin was much of a acid guru. I don't think they wanted to portray him that way as such. It was just a sign of the times. The hippie movement came later and lasted longer in Germany. ...I didn't do well in high school German either. I guess living on a U.S. military base didn't help my language skills all that much. I can still understand a little bit of what he says. It sounds kinda corny today. I just like the kosmiche rock groove of the music and Klaus Schultz wailing on the synth. In some parts I like this better than the Cosmic Jokers or Wegmuller's Tarot.

Thanks. I love this record to death, superb in all respects. It's easy to dislike the religious comments spoken over the music, but I actually thinks it just makes it cooler.

Check out Ash Ra Tempels Jenseits if you like this.

A true psychedelic classic. And why people who apparently are into the world of psychedelics get so upset by some spiritual lyrics - I suppose Golowin's 'talks' are based on translations of original scriptures - has always been hard for me to understand.

There is one really mystic, it´s "jörg mierke" - nobody knows him but he plays really a lot of instruments and bleading background vocals during this session and gives a big influence to the record.Ttogether with klaus schulze he creates the gorgious electronic spheric sound of this really great record. I love this record cause it´s noncommercial and like a trip to the eternity - brainwash!

Who´s the fuck is this "jörg mierke"?

Hi, progrock freaks! :-)
An english translation of the whole songtext: theloveseeker*jimdo*com
(set an . instead of the * )