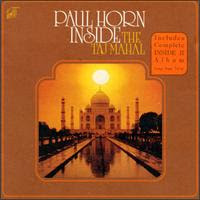 Paul Horn was pretty much a second-tier jazz flautist throughout the 50's and most of the 60's. Somewhere around 1968, he seems to have started searching for some kind of enlightenment and found his calling recording ethereal music which is an important precursor to new age and ambient music, yet also manages to feel fresh today.

This album was recorded on a tape recorder that Horn apparently snuck into the Taj Mahal. Now, on the surface this seems to shoehorn this album into the realm of non-produced home recordings, but the recording location provides a trump card. Although we only hear Horn's flute and the Hindi chanting of a guard who just happened to be around, the acoustics of the Taj Mahal are something else entirely. Throughout the album, the simple instrumentation comes under the effect of a 28 second delay, which manages to produce a wide range of overtones and harmonics. This means that we sort of get a third instrument, which is a magical reverberation that even the best modern studio cannot compete with.

The acoustics alone aren't necessarily going to make this one a classic, but Horn's playing does. forsaking the hard bop jazz sound that he'd been working with on albums past, the flute here is extremely naturalistic and restrained. The sound of the echoing flute fades into the chanting seamlessly. The two artists rarely appear in tandem, but the overtones perfectly glue the performances together.

This is an amazing meditation-centered album. It's certainly a beautiful one which far transcends the new age tag that I often consider a minus. This is one of those albums that while it's playing becomes part of your being. Very highly recommended.
Posted by Dr. Schluss at 2:38 PM

Thank you very much for Paul Horn and for sharing such a lot of other gems.
This blog is great!!!!
Greetz
AnA

There's a volume two, although it was recorded 20 years later (although with the same guard!). I Unfortunately don't have that. I DO have an Inside 2, which was recorded in a studio and pales to this album, but it's still good listening and I'll review it before too long (I think).

Thanks for responding so fast Dr. Schluss!!

Keep up the good work!

Always loved his "Inside The Great Pyramid" as well....great stuff Dr., as per usual.

Thank you Doktor, This was on rycodisk sampler Steal This Disk back in the 80's I look forward to hearing the rest! Thanks
Capt Bootlegg
coast of Maine

I've adored this record for long, long time. Not only is it "Renegade Art", but it stands on it own as an excellent example of "Acoustical Space Documentation". We are more then anything hearing the geometry of the Taj. That's a lot! A must for students of architecture, meditation & pure sound.

Hi! I linked here in a post I put up of Buddy Rich & Alla Rakha on my blog which also features Paul Horn:

You said ...
>I DO have an Inside 2, which was recorded in a studio and pales to this album, but it's still good listening and I'll review it before too long (I think).

PLEASE *DO* POST Inside 2 !
i USED TO HAVE THAT ALBUM , & LOVED IT!
iT`S TOTALLY OOP , AND I WOULD LOVE TO TURN A FLUTEY FRIEND ONTO IT

staggering. they sound like they're inside a grand piano (with the sustain pedal up)!

A big thanks for this one. I can remember hearing this in our local Underground FM station and buying the vinyl of it. It was always a treasure to listen to.

Could anyone please put a link that works (I really want to hear this album!)...the first one is dead. Thank you

There is a set that combines the two on iTunes for only $9.99. Just FYI

I think you got the facts wrong. Paul Horn was a first rate reeds and flute player turned noodley new age blowhard. His back catalog of hard bop stuff is legendary.

Any chance of a re-up on this one?