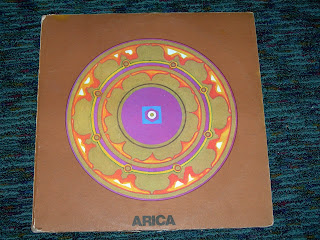 Coming from the streets of New York City is this acoustic meditation piece which is a little too creepy to be new age. This is one of my prime bedtime discs, although I usually have to use headphones because it scares my wife. This is also one of those ultra out-of-print albums that it's practically impossible to find any information on. The music stands pretty well on it's own, though, so let's focus on that.

Judging by the feel of the album, Arica seems to be some early 70's hippies with a predilection for jamming and a strong background in modal jazz. The tracks seem far more improvisational that composed, although it's often clear that someone bothered to write a main theme as you'd find in works by the modal jazz masters. This is not quite a jazz album, though, as Arica takes the modal concept a few steps further, using it to closer approximate the mantra-like vibe of Indian music. There are some fine wordless vocals present too, with some chanting and a little bit of throat singing.

The mostly acoustic sound here (there is some electric bass and jazzy electric guitar runs) is really nicely textured, but is much easier to drift away with than focus on. This gives an edge to the longer tracks like the 18 minute "Mentations" and the 20 minute percussive soundscape "Passive In The Cosmos." You get plenty of time to become completely lost in the sound, although in a manner very different from late ambient music.

This album seems to have appeared in a few different forms. Some tracks seem to have been longer on different pressings, and replaced on another. With a few recurring motifs on the album, it all gets very confusing. At least one version ended with "Reception Of The Buddha," which requires special mention. This 17 minute track bypasses the meditative angle and dives directly for the free jazz jugular. I'm usually asleep by the time this one rolls around, but I imagine I'd probably end up staying awake if I started here. It's OK if you're receptive to free jazz, but Ornette Coleman and John Coltrane did this genre better.

With the exception of the final track, Arica is a fine meditative and early-worldbeat mash up with chilled jazz. Maybe it'll become one of your favored sleepy time albums too.
Posted by Dr. Schluss at 12:03 PM

Hey Doc - I think one of these files is messed up - I get one track that lists as 20:00 long, where in the gatefold it shows as 2:30. Can you clarify or comment?
Thanks, by the way, for the post. This is a record I've really been wanting to hear.

Can't say I know what's going on either with the tracks. I'll chalk it up to oddities among the various pressings of the album.

Arica is a "school of consciousness" and this music was used in the early 70s for meditations. There was no musical group called Arica--the name is there because the album was recorded and sold by the school to assist "students" in meditations. Arica is still going strong and more information can be found at

Oh, so that clears a few things up. Thanks for the link Ken!

Ditto - Yes, thanks a lot for the link!

I would be beyond stoked if you were to reupload this album. It has been a hard search.