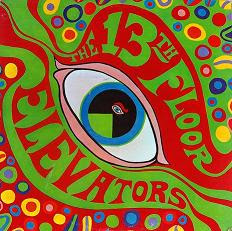 Although the San Francisco, Los Angeles and Carnaby Street psychedelic scenes of the 60's are well documented and revered, some of the also-enviable microscenes are left out in the cold. Chief among these is the Austin, Texas scene from which sprouted a just-starting-out Janis Joplin, the Red Crayola, and the infamous 13th Floor Elevators.

Although a proper band, the most notorious member of these garage-psyche rockers is Roky Erickson, sometimes regarded as America's own analog to Syd Barrett. Like Barrett, Erickson shined with the band for a few albums before embarking on a fractured solo career. Fortunately for Erickson, despite his questionable grasp on sanity, he continues to occasionally pop up to make music to this day. Even better, Erickson possesses perhaps the finest voice ever heard in garage-psyche, a wildman yelp that whcih always sounds obssessed, and manages to make even more half-baked sounds worthy. On the album in question, Erickson is at his finest.

But the 13th Floor Elevators were not a one trick pony. Lyricist Tommy Hall wanted to double as a true member of the band and brought in something called the electric jug. It produces a truly odd, bubbly sound that permeates most of the band's songs. In full disclosure, you'll either love it or hate it, and if you hate it, it will be difficult to get into this band. The real secret weapon here, however, is lead guitarist Stacy Sutherland. His winding and often stately leads compare favorably with even such notables as Jorma Kaukonen of the Jefferson Airplane.

The Psychedelic Sounds Of The 13th Floor Elevators is often cited as the first psychedelic album. Although that's more than up for debate, I do believe it was the first album to actively use the word "psychedelic." The still eye-catching sleeve was definately among the first of its kind.

The Elevators seeked to expand their music making into a strange, acid-drenched form of philosophy. Judging by the rantings on the back cover of the record jacket, they didn't really think out this philosophy, but it does seem to bring a certain level of conviction to the music. It also makes the lyrics a notch above the norm of most of the band's contemporaries. Even when they don't make sense, they seem to being saying more than just the typical boy-meets(or loses)-girl love songs.

Leading off the album is what I consider one of the best rock songs ever, "You're Gonna Miss Me." At heart the tune is a typical mid 60's stomper, but with the electric jug wildly perculating and Erickson sounding truly possessed, the whole track turns to gold. Soon the Elevators start to bring out the truly psychedelic riffs. "Roller Coaster" provides a trance-like guitar part that eventually erupts into a rave-up that rivals those of The Yardbirds. Later we hear a speaker-busting bassline that can consume your mind on "Reverberation (Doubt)." Although arguably at their best on the full-blast psych-rockers on this album, the Elevators churn out some more-than-respectable folk-psych ballads on "Splash 1," "Don't Fall Down," and "You Don't Know." These tracks hint at the path that the band would follow on their next album Easter Everywhere.

The chief problem on The Psychedelic Sounds Of The 13th Floor Elevators is the often-muddy production. I'd imagine that the culprit for this is the recording budget rather than the band or producer Leland Rogers (Kenny's brother!). Still, it makes obtaining a copy of this album worth a little research. There's a 180-gram vinyl pressing that manages to sound pretty good. I'm sitting with a 2005 Charly Records CD, which is my 3rd CD copy of this disc, and the first to remove some of the gauze from the sound. Even on this remastered disc, it's a primitive sounding recording and requires the listener to have some appreciation for lo-fi.

The Charly CD includes 10 bonus tracks that are enjoyable, but are no more than a supplement to the album. First we get several live tracks of rock standards ("Before You Accuse Me," "Everybody Needs Somebody To Love," "You Really Got Me," "Roll Over Beethoven," "Gloria," and "The Word") that are sort of a history lesson. Very few bands could get away with playing all originals in 1966, and playing these tunes were the 13th Floor Elevators' bread and butter on the ballroom circuit. We also get an early version of "She Lives (In A Time Of Her Own)," which later appears on Easter Everywhere, and a single from Erickson's previous band, The Spades. On the single we hear an early, straight-faced version of "You're Gonna Miss Me," which manages to bring into relief exactly what the Elevators brought to the song to make it truly great.

Buy Me:
The Psychedelic Sounds Of The 13th Floor Elevators
Posted by Dr. Schluss at 2:36 PM

Hi, you 've got a pretty cool blog!!! Sadly, I can't find the link to download the psychedelic sounds of the 13th floor elevators. Could you please tell me where is it? Thanks in advance